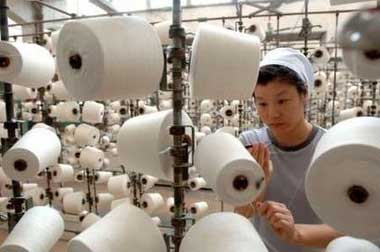 Globally, more than 60 million people work in the textile or clothing industries and are at risk of occupational lung disease from exposure to hazardous dust (Forstater, 2010 ). In a recent review, Peggy Lai, M.D., M.P.H., an instructor at Harvard Medical School and a research associate in the Department of Environmental Health at the Harvard School of Public Health, evaluated the respiratory health effects of global occupational exposure to cotton and other organic dusts.

Byssinosis is the term used to describe the adverse respiratory effects experienced by textile workers exposed to organic dust. Also called “Monday Asthma,” byssinosis is characterized by shortness of breath and chest tightness occurring on the first day back to work after a weekend off. Paradoxically, symptoms improve throughout the workweek despite ongoing exposure.

“As a syndrome, byssinosis describes a collection of symptoms, and has become dissociated from common respiratory diseases that we treat every day,” said Lai, who found that respiratory disease due to organic textile dust has characteristics of both asthma and chronic obstructive pulmonary disease. “Part of the effort of this review was to describe byssinosis within common disease classifications to help physicians understand disease prognosis and treatment.”

While earlier studies suggested that people working dustier jobs would experience the most severe health effects, more recent research indicates that it is actually the level of endotoxin, not dust, which causes accelerated decline of lung function. Endotoxin is a component of the cell wall in gram-negative bacteria, and is a common contaminant in cotton dust.

Silk textile workers are an ideal control group to study the respiratory effects of endotoxin because, unlike cotton dust, silk textile dust is endotoxin-free. The Shanghai Textile Worker Study, led by NIEHS grantee David Christiani, M.D., M.S., M.P.H., from the Harvard School of Public Health, is an ongoing 30-year study of cotton and silk textile workers. In this study, cotton workers had more persistent and severe declines in lung function compared to silk workers (Wang et al., 2005 ). Additionally, in retirees who are no longer exposed to textile dust, lung function increased in both cotton and silk workers, but the effect was twice as great for cotton workers (Shi et al., 2010 ). These findings support the role of endotoxin as a main causative agent for lung function decline in cotton textile workers, and also suggest that these adverse respiratory effects are partially reversible once exposure to cotton dust or endotoxin ceases.

Lai is now working on several research projects with Christiani based on the Shanghai Study. Their work includes high resolution CT scans to investigate whether occupational endotoxin exposure leads to permanent anatomic changes in the lung. They are also exploring whether endotoxin exposure causes sustained epigenetic and gene expression changes in the airways of textile workers.

“Endotoxin is ubiquitous in the environment. It is present in tobacco smoke, other occupational settings such as farming and sewage treatment plants, and recently has been found at high levels in European and American public schools,” said Lai, who hopes her research will inform respiratory health research in other settings where endotoxin exposure is high.