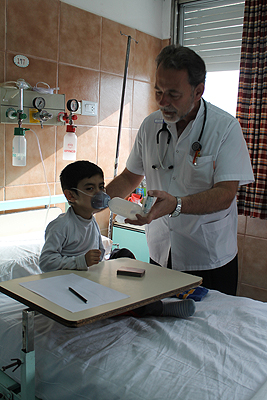 Almost everyone has been exposed to the respiratory syncytial virus (RSV) by age 2. For most people, mild symptoms, such as a cold, may result. But the virus can also trigger severe respiratory disease including acute lower respiratory infections like bronchiolitis and pneumonia, in children and adults. RSV causes 3.4 million episodes of illness severe enough to require hospitalization per year, according to the World Lung Foundation, including the deaths of 200,000 infants per year, mostly in developing countries. There is no vaccine.

In addition to acute effects of RSV, “there are also sequelae to be concerned about,” explained Steven Kleeberger, Ph.D., an NIEHS researcher in the NIEHS Environmental Genetics Group, with ongoing global projects investigating RSV. Severe, and even mild, RSV disease in early childhood carries a higher risk of developing asthma and other lung-related illnesses later in life. And RSV is not just a threat to infants, but also to immunocompromised adults. “Thus,” says Kleeberger, “a large portion of the population is at risk, which makes it a public health concern.” The Environmental Genetics Group seeks to understand the role of genetic background as a susceptibility factor in the pulmonary effects of environmental stimuli. The disparity between RSV disease severity and mortality rates in developed compared to developing countries is an example of how a virus can have such diverse effects on populations.

Kleeberger has collaborated on RSV research for more than a decade with Fernando Polack, M.D., a researcher at Vanderbilt University and Fundación INFANT  (The Infant Foundation of Argentina). In the collaboration between NIEHS and Fundación INFANT “we translate from lab and animal models into populations,” Polack said. “And the questions that emerge from those populations can be studied back in the lab.”

In the United States, about 1 in 100 infants infected with RSV is hospitalized, according to Polack, but the number multiplies to about 3 per 100 in developing countries. Moreover, almost all infant deaths caused by RSV occur in developing countries. “RSV season”—which varies by location, but generally is an area’s colder or wetter months—causes a systemic burden that goes beyond the consequences for individual health, as health systems must devote limited hospital beds and resources to these cases during the seasonal spikes.

The two investigators’ labs focused on the interaction of the environment with genes, such as NRF2, that have been identified as candidate susceptibility genes for RSV infection in mice. While they stressed that their research is still under review prior to publication, Kleeberger said, “We are interested in the role that socioeconomic status (SES) plays in severity.”

In another recently completed study, Kleeberger and Polack studied the role of innate immunity genes in the progression of RSV. They are now preparing to publish their results from a study of 1,200 infants (800 infected with mild or severe RSV, 400 unaffected) recruited from eight Buenos Aires hospitals. Generally, among this cohort, children from lower-income households lived in rural areas, while more middle- and higher-income children lived in urban areas.

How may SES affect the environment, which in turn, affects genes so they lessen or worsen the risk of developing severe bronchiolitis due to RSV? One possibility, Polack said, could be that molecules in dust or other pollutants that are more present in lower SES areas interact with the genes. “In our study, we have seen that depending on where a child lives, his or her genes alter the risk of severe bronchiolitis due to RSV differently,” he said.

“SES status incorporates what people are exposed to during the first few years of life and how that might impact their immune functions,” said Kleeberger. “We believe we have a potential mechanism that we’ve been able to validate in animal and in vitro models that could have a big impact on how we think about RSV.” 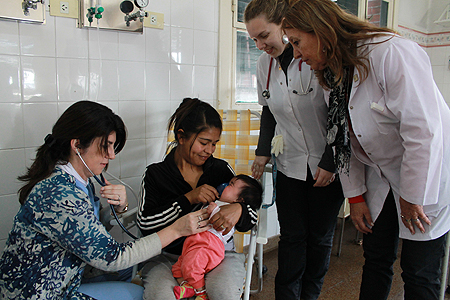 Polack stressed that other factors have a role to play in RSV severity, at least two of which are related to mothers. Supported by a grant from the Bill & Melinda Gates Foundation, Polack and colleagues in Argentina and at Vanderbilt published research earlier in 2013 that found that the most severe cases of RSV in infants in the first year of life corresponded to a maternal diet high in carbohydrates. With this research in hand, the Infant Foundation is working with Argentina’s Ministry of Public Health to help develop policies to support easier access for mothers to diets low in refined sugars. In terms of this and possibly other prenatal exposures that can affect the infant, Polack stated, “obstetricians may become the first pediatricians.”

In other research, Polack found that breast milk has an important protective effect against RSV, although the effect was principally found in prematurely born girls. Polack noted two important implications: first, the fact that breast milk protection from RSV was shown to be different in males and females may indicate that “the recipient of breast milk has something to say about the protection—breast milk provides active not passive protection.” Second, he said, breast milk activates a mechanism to protect against many microorganisms at once. The INFANT Foundation is now looking at breast milk fed to a baby from a surrogate (i.e., from a breast milk bank) to see if milk without the familial relationship confers similar protection in middle-income countries with a high number of premature babies, but limited resources for preventive medicines, against acute lung diseases.

Two factors make preventing cases of respiratory disease caused by RSV challenging: the lack of a vaccine and low public awareness compared to influenza and other seasonal diseases. To improve public and healthcare provider education, the Centers for Disease Control and Prevention has resources about the virus, with a focus on the U.S. population. The World Health Organization has launched the Battle against Respiratory Viruses (BRaVe) initiative to address challenges in treatment of acute respiratory infections, including those caused by RSV.

Because no vaccine exists, identifying those most at risk during each year’s RSV season is critical.  Kleeberger and Polack’s research approaches have identified genetic markers of susceptibility to RSV disease to predict severe responders that may also provide more therapeutic targets. Having a better handle on who will get through RSV season with the sniffles and who is at risk of severe disease, and developing appropriate interventions for those most at risk, can potentially save thousands of lives a year. 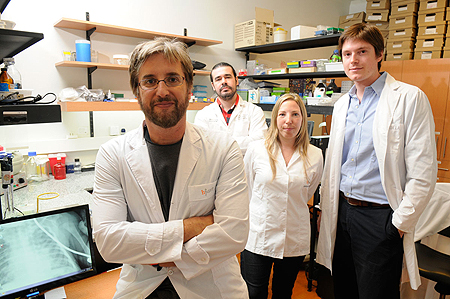 INFANT does research through a large network of hospitals in Argentina and, more recently, in Brazil. They often work with external researchers looking for a way to translate in vitro and animal model work to population-based studies, and they conduct educational exchanges for health care providers and students.

In other research over the past decade, INFANT has looked at the association between bronchiolitis and asthma, impacts of H1N1 and of dengue on pediatric populations, and other many other topics.