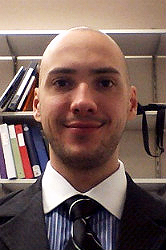 NIEHS-funded Superfund Research Program (SRP) trainee Oleksii Motorykin travelled from Mariupol, Ukraine, to Corvallis, Oregon, to pursue his graduate studies. At Oregon State University (OSU), he works in the laboratory of Staci Simonich, Ph.D., on a project to understand the composition, exposure, and mutagenicity of polycyclic aromatic hydrocarbons (PAHs) in highly exposed populations.

“When I came to OSU, the project about lung cancer in the world excited me because of the global impact,” said Motorykin. “It's just interesting to see how the world works and how things can affect health risk.” Motorykin recently discovered that lung cancer deaths are linked to PAH emissions that pollute the air, independent of cigarette smoke.

Motorykin investigated the relationship between lung cancer mortality rates, carcinogenic PAH emissions, and smoking on a global scale by assessing the contribution of carcinogenic PAH emissions to lung cancer mortality rates for 136 countries with different socioeconomic groupings. He found a positive association between lung cancer deaths and PAH emissions, independent of smoking prevalence, for high income countries, as well as for the combination of upper-middle and high socioeconomic country groups. His study, published in Environmental Science and Technology , is the first to link PAH emissions with lung cancer on a global scale, and shows the need to take air pollution into account when assessing global lung cancer risks.

Motorykin became interested in environmental health while still in Mariupol. The city has high levels of pollution and very little was being done to reduce it. He focused on chemical control of the environment as a student in Kyiv, where he received his bachelor's and master’s degrees in chemistry from Taras Shevchenko National University.

Motorykin hopes to stay in the United States after he completes his doctoral degree, and venture more into the public health side of environmental health, focusing on health risk assessment. As a step toward this career interest, he is working at the Centers for Disease Control and Prevention (CDC) this summer. Outside of the lab, Motorykin is an avid mountain climber. Since he’s been in the United States, both he and his career have reached new heights.