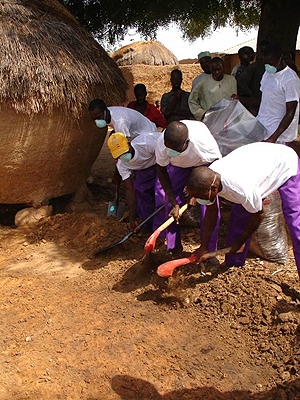 A devastating lead poisoning outbreak in 2010 linked to artisanal gold processing in Zamfara State , Nigeria killed hundreds of children under the age of 5, and left thousands more with permanent disabilities. An interdisciplinary team of earth and health scientists have defined the major causes of the outbreak, reported in Environmental Health Perspectives (EHP). The researchers attribute the mass lead poisoning to both the artisanal method in which villagers process the ores and the geology and climate of the region that influence how readily lead is absorbed into the body.

“Lead poisoning on the scale we saw in Zamfara State, Nigeria is a rare event, “ said Mary Jean Brown, Sc.D., RN, Chief of the Healthy Homes and Lead Poisoning Division Branch at the U.S. Center for Disease Control and Prevention (CDC). “But people need to understand that childhood lead poisoning is a prevalent condition internationally, especially in countries with developing economies where there are few measures in place to control contamination.”

Researchers from the CDC and TerraGraphics Environmental Engineering collected soil samples and gold ore samples at each stage of mining and processing in two heavily affected Nigerian villages. The United Stated Geological Survey (USGS) analyzed the samples and found soil samples with lead concentrations reaching up to 185,000 ppm. The U.S. Environmental Protection Agency’s lead soil standard for areas where children play is 400 ppm .

Ores were often processed in Zamfara within family compounds where children were present. Initial processing involved breaking down and grinding the ore until it is reduced to a flour-like consistency. The resulting dust-sized, lead-rich particles are readily dispersed, inhaled, and ingested through hand-to-mouth activities, and are easily absorbed into the bloodstream through the gut. Young children are most susceptible to lead poisoning because of its damaging effects on developing nervous and reproductive systems.

Ore processing also increases exposure to other gold ore components. For example, inhalation of crystalline silica, that are predominant in even lead-poor gold ores, cause respiratory diseases among ore processors. Most such workers do not use protective dust control measures. The study also found evidence of manganese, mercury, arsenic, and antimony in soil samples. The long term health effects of exposure to this complex mixture of toxicants are poorly understood. Other studies report synergistic interactions for lead-manganese and lead-arsenic co-exposures.

Not all forms of lead are equally toxic because some are more readily absorbed into the blood stream than others. The geology of ore deposits and climate conditions ultimately dictate lead’s toxicity. “Over millennia, weathering of gold deposits in Nigeria has transformed minimally bioaccessible lead sulfides into highly bioaccessible lead carbonates,” said Geoffrey Plumlee, Ph.D., senior research geochemist with the USGS, “and that is the key thing that caused the lead poisoning outbreak in these villages.”

By understanding how geology and climate interact, earth scientists can predict which gold deposits around the world are likely to contain highly bioaccessible forms of lead. Overlaying the geological data on top of areas with known artisanal mining can help environmental health scientists identify areas most susceptible to lead poisoning events.

Plumlee and colleagues at the USGS are developing a mapping tool do just this. “Environmental health issues are very complex and require input from a lot of scientific disciplines to understand how they originate, how they can be prevented, and how they can be remediated,” said Plumlee. “The earth science community can help the public health community understand how health issues related to artisanal mining originate. We can be the first line of warning.”

There is no safe level of lead exposure in children, according to the Centers for Disease Control and Prevention. Even low levels of lead in blood have been associated with lower IQ and impaired academic achievement. Though effects of lead exposure cannot be corrected, lead exposure can be prevented. Yet, according to a new study published in EHP, childhood lead exposure is costing developing countries $992 billion annually—1.2% of the world gross domestic product in 2011—due to reductions in IQs and earning potential. Although use of lead paint has been long banned in the United States and Europe, it continues to be sold and used in the developing countries, and is a major source of exposure, along with battery manufacture and hazardous waste sites.