E-Waste Recycling in China: A Health Disaster in the Making? 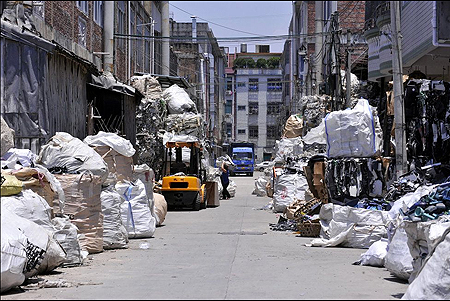 Guiyu, China, is the last stop for tens of millions of tons of discarded TVs, cell phones, batteries, computer monitors, and other types of electronic waste each year. In this area of Guangdong province in southeast China, the industry is characterized by thousands of small, family-run workshops interspersed with residences, schools, and stores. The workshops employ hundreds of thousands of local and migrant workers to extract copper, silver, gold, platinum, and other materials for resale, often burning or using acid baths to separate out the elements of interest. NIEHS-supported researcher Aimin Chen, M.D., Ph.D., an assistant professor in the Department of Environmental Health at the University of Cincinnati College of Medicine, is studying the impacts of e-waste recycling on pregnant women and their children in Guiyu.

The Risks of Recycling

With an estimated 20–50 million tons of e-waste produced annually worldwide, it is the fastest-growing stream of municipal solid waste. Management of e-waste is a significant environmental health concern. In developing countries, where most informal and primitive e-waste recycling occurs, workers and others who live near these recycling facilities are exposed to dangerous chemicals with potentially long-term adverse health effects. Other locations where such recycling is prevalent include India and Ghana, Liberia, and Nigeria in Africa.

As they process e-waste, workers—who are often children—are directly exposed to lead, cadmium, brominated flame retardants, and other toxic chemicals, many that present development risks. Chen noted that workshops are rarely well-ventilated and workers wear little, if any, personal protective equipment. Individually, these chemicals carry health risks; mixtures of them are potentially further cause for concern. The e-waste that is not commercially viable is dumped or burned. Thus, workers and others in the community, including children, are exposed through inhalation of fumes, ingestion of dust, contact with water and soil, and other pathways.

“As the use of electronics grows in both industrialized and developing economies, this will be an ever-increasing public health problem,” said Chen, with vulnerable populations at greatest risk.

In a review article, Chen and his co-authors concluded that pregnant women and young children living close to informal e-waste recycling sites are at risk of possible perturbations of fetus and child neurodevelopment.

Although imports of e-waste into China are officially banned, a report by the United Nations’ initiative, Solving the E-Waste Problem (StEP ), states that large volumes still find their way into the country from the United States, Europe, and other countries in Asia, while e-waste generation within China in 2011 was estimated at 1.2 million tons for televisions alone. In China, as elsewhere in the world, the volume of e-waste is growing exponentially.

Chen noted the paradox in public perceptions about e-waste recycling: “We often think that recycling is a good thing and better than mining these minerals from the ground,” he said. “The problem comes when the way of recycling is not environmentally friendly or good for people’s health.”

Research on Women and Children

Chen is working in Guiyu with Xia Huo, M.D., Ph.D., a professor and Director of the Analytical Cytology Lab at nearby Shantou University Medical College. The joint study enrolled 600 pregnant women from Guiyu and from a control site. The researchers measured metal exposures in the women, and are looking at birth outcomes and, ultimately, long-term outcomes on the infants’ neurobehavioral development. Chen said they hope to publish the first of their results in the next few months. “We want to analyze exposure levels, and also provide some recommendations about how to advise the community about the risks,” he said.

Huo has conducted her own research on children in Guiyu since 2004. She said she became aware of the potential problems associated with e-waste recycling after joining the faculty at Shantou, about 40 kilometers away from Guiyu, in 1998. A memory of two small children swimming in a highly polluted stream in Guiyu stays with her more than a decade later. In addition to focusing on children because of their developmental issues, studying the workers is also difficult, she said, because they move frequently from workshop to workshop, and even between Guiyu and their homes elsewhere in China. Also, employers are often reluctant to allow researchers to enter their facilities and slow down the work, she said.

Chen’s and Huo’s studies are part of a growing, but still small, body of research on the impacts of e-waste on children. The observed health issues, including respiratory irritation and skin burning, in addition to the effects mentioned above, led the World Health Organization recently to develop an initiative on e-waste and children’s health. In June, with support from NIEHS and others, WHO convened a Work Group on E-Waste and Children to bring together experts and other stakeholders (see Box). An informal survey conducted in preparation for the meeting indicated only a handful of studies exist that look into health impacts of e-waste. One of the objectives of the meeting was to call more attention to the issue among the global scientific and medical communities.

There are some small signs that improved awareness and knowledge of the hazards can lead to improvement. For example, Huo said Guiyu local authorities published a decree in 2012 to ban burning e-waste and soaking it in sulfuric acids, and have promised greater supervision and fines for offenses. She also said that 2012 was the second year since 2004 that concentrations of metal, especially lead, decreased in the children studied. (They attribute the other year of decline—2009—to the global financial crisis that resulted in smaller volume of materials recycled.) Still, much remains to be done in Guiyu and worldwide. Increased awareness of this issue among global consumers, evidence-based interventions, and policy changes will be important to reduce the burden of disease among children and adults working in the e-waste recycling trade.

At the Working Group on E-Waste and Children’s Health meeting convened by WHO in June and co-sponsored by NIEHS and Germany’s Federal Ministry for the Environment, Nature Conservation and Nuclear Safety, NIEHS Director Linda Birnbaum, Ph.D., stressed the importance of understanding and mitigating against the effects of e-waste recycling.

“Having this group review the current situation of e-waste exposure in children, identify research gaps, and highlight successful interventions and strategies will help us determine our next steps,” she said in opening remarks to the participants via a prerecorded video. “E-waste and the impact that it can have on health is a major topic of concern for all of you and for us at NIEHS, especially the impact it has on pregnant women and young children living so close to e-waste recycling sites.”

Chen and Huo were among the approximately 60 experts and other key stakeholders from WHO, other UN agencies, and research institutions. Next steps include creation of a network of researchers willing to share data and disseminate findings, dedicated sessions on e-waste at the Pacific Basin Consortium Meeting and the Fourth WHO International Conference on Children’s Environmental Health, and several publications. In addition, NIEHS will develop a white paper that connects the discussions and recommendations of the meeting as they relate to the mission of the Institute. 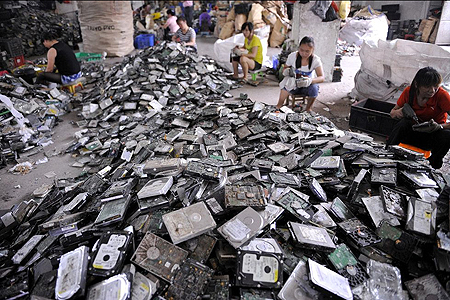