Arsenic: Learning the Effects, Lessening the Impacts in Bangladesh 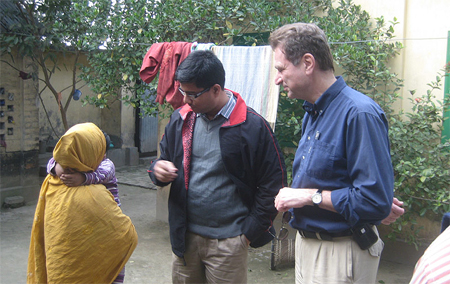 DCH pediatrician Dr. Omar Sharif and Christiani talk with a Bangladeshi woman in the Pabna area. The team goes household-to-household to talk with research participants at various stages of its studies.

In the world of global environmental health, good intentions can sometimes have unintended consequences. In Bangladesh in the 1970s, aid organizations and international agencies promoted a program to install tube wells to reduce diarrheal morbidity and mortality caused by drinking unsafe surface water. But many of the wells, which reach between 30 and 180 feet underground, tapped into naturally occurring inorganic arsenic as they provided supposedly safer water to tens of thousands of villages throughout the country.

Inorganic arsenic is colorless, odorless, and tasteless, but its impacts are chronic and long-term. People have no way to detect on their own that they are drinking arsenic-laced water. In 1996, physicians with the Dhaka Community Hospital Trust (DCHT) saw their first cases of what they confirmed were arsenic-caused skin lesions in a village about 130 kilometers from Dhaka, according to Quazi Quamruzzaman, M.D., chairman of the trust. Testing confirmed the connection to the tube wells.

A 2009 survey in Bangladesh by UNICEF, found 12.6 percent of the population of 150 million had arsenic in household drinking water above 50 parts per billion (ppb). Given that the World Health Organization standard is now 10 ppb, however, many more millions can be said to be at risk.

NIEHS grantee David Christiani, M.D., at the Harvard School of Public Health, has worked with DCHT for more than a decade. In identifying this hazard, “they were at the forefront of the clinical and descriptive epidemiology,” he said. Christiani’s research group is looking at health effects to provide insights applicable to arsenic-exposed populations in Bangladesh and throughout the world.

A History of Hope

According to a review in the March 2013 Environmental Health Perspectives , arsenic exposure can have multiple negative outcomes in addition to the dark skin lesions that tipped off the doctors in Dhaka, including cancers of the lung, bladder, kidney, liver, lung, and skin; damage to blood vessels, and nerves, impacts on development of fetuses and children; and disruption of the immune and endocrine systems. The Agency for Toxic Substances and Disease Registry ranks arsenic as the leading substance on its Substance Priority List based on frequency, toxicity, and potential for human exposure.

Beginning in the early 2000s, the NIEHS Superfund Basic Project provided funding for Christiani’s arsenic research in Bangladesh, beginning with a case control study of skin lesions and a repeated measures biomarker study. While their research has confirmed negative effects, other findings have shown that remediation can reverse at least some of these effects. In a follow-up study conducted in 2009–2011, Christiani’s group found reducing arsenic contamination increased the odds that an individual with skin lesions would recover or show less severe lesions within 10 years.  The study, published in Environmental Health Perspectives , provides hope.

“Our partners in Bangladesh have made arsenic remediation a part of primary care with good results,” Christiani said. “In the late 1990s, there was a lot of fatalism [regarding arsenic effects]. This research showed that the remediation that our partners are pursuing can have positive results,” he added.

NIEHS is now supporting further research by Christiani’s group, including studies of the effects of mothers’ exposure on newborns and children. The Arsenic and Birth Outcomes in Bangladesh study collected data from 2007 through 2012. A sample of 1,400 already-exposed women were recruited and followed through pregnancy and birth.  The urine, blood, and hair of these women was used to measure inorganic arsenic levels, as well as arsenic metabolites in urine. A preliminary analysis shows lower birth weights in newborns of mothers with higher arsenic levels during pregnancy.

In addition to arsenic, the test water was found to contain varying levels of manganese. Analysis of blood from umbilical cords and in young children show elevated lead levels, so Christiani’s team has expanded its focus to looking at mixed metal exposures on birth outcomes. Multi-metal exposures—specifically arsenic, manganese, and lead—may create different or worse health outcomes.

With his collaborators from the Harvard Superfund Program Project, Christiani is beginning a new study to follow the children born into the reproductive study as they grow and develop. “We had been focusing on adults, but this study of life cycle exposures, even at low levels of arsenic, will be of public health interest,” Christiani said.

The tube wells that triggered the arsenic crisis in Bangladesh created an unfortunate opportunity to research a large population. However, what is learned there can be applied not only in other arsenic geographic “hot spots,” such as Mongolia and Southwest Asia, but also possibly in areas with lower levels or with mixed-metal exposures. There are many locations in the United States where groundwater contains arsenic concentrations in excess of the Environmental Protection Agency standard of 10 parts per billion. As reported in "In Small Doses: Arsenic," a short documentary film produced by the Dartmouth Toxic Metals Superfund Research Program, millions of private wells in the United States have unknown arsenic levels, and in some areas of the country, over 20% of wells may contain levels that are not safe.

Some of the implications from the work of Christiani’s group include that arsenic can have an impact at lower levels than previously thought and that skin lesions may be reversible when exposures are reduced or eliminated. Biomarkers of healthy people exposed to arsenic can provide important clues about how the body handles this exposure. These results provide a good example of how the research supported by the Superfund Research Program can help to not only identify hazards and suggest ecological remediation, but also offer means to directly improve health.