For nearly two decades, Luz Claudio, PhD, has worked as an NIEHS-supported grantee to build environmental health and related research training programs in Latin America. Claudio, who grew up in Puerto Rico, received her scientific training at the Albert Einstein College of Medicine in New York City and now works at Mount Sinai School of Medicine, also in New York. She feels strongly about the need for U.S. scientists to participate in building research capacity around the world. “My expertise as a scientist and my cultural background are the things that drive me to create global health programs with a deep understanding of the challenges that researchers face in developing countries. I also understand that the programs must be bi-directional because the benefits are mutual” she says.

Claudio began dedicating herself to global health collaboration in 1995 with her first grant from NIEHS and the NIH Fogarty International Center (FIC) through the International Training and Research in Environmental and Occupational Health (ITREOH) program. The goal of the grant was to create a network of well-trained environmental and occupational health scientists and physicians in Latin America. “The program was designed to prevent the “brain drain” that so often is a downside of training programs based in the United States, where trainees from low-income countries stay here after completing the training,” said Claudio. Over the next 16 years, the ITREOH program that she helped to develop trained 52 mid-career research fellows from five institutions in Mexico, Brazil, and Chile. “In our program, only 2 of the 52 fellows emigrated to other countries [from their home country] after completing the program.” To ensure that the capacity was returned to the partner countries, Claudio’s program had three key components: mentored research training conducted through partnership with the international fellows’ home institutions; research projects that were based in and of significance to environmental and occupational health needs in that country, and long-term support for a network of fellows based on the idea of “once a fellow, always a fellow.” 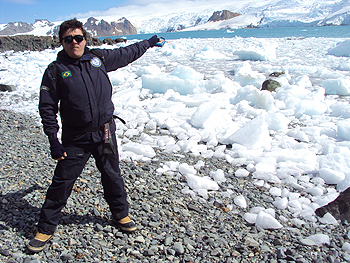 Former ITREOH fellow Dr. Joao Machado Torres was supported on a project in Antarctica to track DDT and other persistent organic pollutants in birds called skuas and in penguins.

The success of the approach is evident: trainees from the program are now in positions of scientific influence in their countries. Many are directors or leaders of their own research programs in environmental and occupational health in government or academic institutions. Joao Machado Torres, PhD, who conducts research on the bioaccumulation fate of persistent organic pollutants in the Amazon and in Antarctica, is one of the most successful fellows to come out of the Mount Sinai ITREOH program. Said Torres, “Luz and her colleagues at Mount Sinai consistently provided me with close mentoring, resources, and encouragement that have guided my career since I became a fellow of the program over 12 years ago.” He is now a professor of environmental biophysics at the Rio de Janeiro Federal University in Brazil.

Importantly, said Claudio, the program has created a “full circle” of training, in which many of the ITREOH participants now mentor minority U.S. students. Through the Mount Sinai Minority Health and Health Disparities International Research Training Program, 67 minority students have completed mentored research abroad at sites that had previously been ITREOH partners. Claudio is also the director of this program, which is funded by the National Institute on Minority Health and Health Disparities. “The Mount Sinai International Exchange Program significantly enriched my professional development because it was my first opportunity to perform epidemiologic research and my first introduction to the field of environmental health. Work alongside Dr. Lizbeth Lopez-Carrillo at the National Institute of Public Health in Cuernavaca was one of the highlights of my public health training and helped me transition into a career in epidemiology” said Sasha McGee, an African-American student who participated in the program and who is now a newly appointed officer in the Epidemic Intelligence Service (EIS) program sponsored by the Centers for Disease Control and Prevention.

Claudio is currently also supported by NIEHS and FIC under the Millennium Promise grant program. This project aims to promote training in pediatric environmental health in Latin America, thus using and expanding the inroads already made in the other two earlier programs described above. Through an innovative use of online and in-person teaching methods, the program has trained over 50 health and research professionals from Mexico, Chile, Colombia, Costa Rica, Peru, Uruguay, Brazil, and Bolivia since 2010. An example is a study of prenatal manganese exposure and fetal growth in Costa Rica being conducted by Ana Maria Mora, a doctoral degree candidate from the Central American Institute for Studies on Toxic Substances of the Universidad Nacional in San Jose, Costa Rica.