The 2010 Global Burden of Disease Report: What It Means for NIEHS and Global Environmental Health

The Global Burden of Disease Study 2010 (GBD 2010) published in the Lancet in December 2012 has provided an update to the landmark 2000 Global Burden of Disease report published by the World Health Organization (WHO).  The 2000 report developed a comparative risk assessment methodology which allowed estimates of the burden of disease that could be attributed to a large array of risk factors, including environmental exposures and personal behaviors. A follow-up report published by the WHO in 2006 further characterized the environmental burden of disease. These reports estimated that 24% of the world’s burden of disease can be attributed to environmental factors, with the number increasing significantly for children and for those living in low- and middle-income countries.

The 2010 GBD report is the largest systematic research endeavor to describe the global distribution and causes of a wide array of major diseases, injuries, and health risk factors and involved nearly 500 researchers from more than 300 institutions in 50 countries.

The report has several compelling findings on the global burden of environmental disease.  While the burden of disease attributed to polluted water decreased from 1990 to 2010, the burden attributed to polluted outdoor air has gone in the other direction. The report estimates that worldwide, 3.2 million adults died in 2010 from exposure to ambient air pollution, up from 2.9 million in 1990, and an additional 3.5 million adult deaths occurred due to exposure to household air pollution. At 6.9 million, the total number of air pollution related deaths, outpaced the 6.3 million deaths attributed to cigarette smoking.

And while the overall number of deaths attributed to household air pollution decreased between 1990 and 2010, the current estimate of 4 million, including roughly 500,000 deaths attributed to the contribution of household biomass combustion to ambient air pollution, is far greater than the roughly 2 million deaths estimated in the 2000 GBD report.  The reason for the increase is the inclusion in the current GBD of cardiovascular disease as an outcome of air pollution exposure.  These figures show that the burden of death is far greater among adults than previously noted, especially as the rate of lower respiratory infections has declined 55¬60% in children over the past two decades.

Another risk factor listed among the top 20 causes of death is one of the oldest and best characterized environmental hazards-lead exposure. The burden of death for this risk factor increased more than 220% between 1990-2010 among those listed, from 210,000 to 675,000.

A key finding of the report is the global decline in infectious diseases and concomitant increase in chronic, non-communicable diseases such as diabetes, heart disease, cancer, asthma, and mental ill health.  In addition to the clear contribution of air pollution, there is growing scientific evidence that environmental exposures from heavy metals like arsenic and lead and endocrine disrupting chemicals also contribute to non-communicable diseases.  The growing and serious burden of these diseases points to a need to better understand the role of early life exposures in their causation and development. 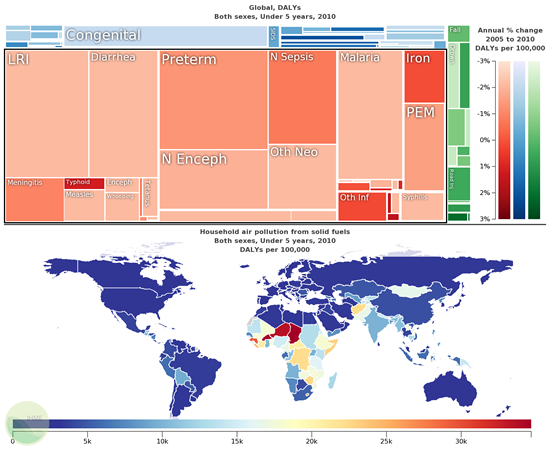 Institute of Health Metrics and Evaluation, © 2013 University of Washington.

The report lists 8 nutritional risks among the top 20 causes of death, including insufficient intake of fruits, vegetables, fiber, nuts and seeds, whole grains, and omega-3 fatty acids, as well as excess intake of sodium and processed meats.  The implications for global agriculture and nutritional policies are profound, with likely environmental consequences related to the use of and exposures to pesticides, land use issues, and the ability to control greenhouse gas emissions.  The role of omega-3 fatty acids in human health, which predominantly come from seafood, has particular implications for the management of fisheries and prevention of toxic contamination of this food source.

Some important analyses for global environmental health are not yet included in the report: for example, estimates of the health burden attributable to climate change are still being finalized.  A comprehensive analysis of environmental risk factors, like the follow up report published by the WHO in 2006, is not part of the current analysis.  These additional analyses will be welcome information; however, there are some clear priorities to be gleaned from the current GBD report.  Reducing exposures to air pollution, whether from power and other industrial plants, motorized vehicles, household biomass combustion, or wildfires, is paramount to decreasing the burden of adult deaths.  The association of toxic air pollutants with short- and long-lived climate forcers such as black carbon and carbon dioxide affords multiple opportunities to address the threats of global climate change and air pollution simultaneously by decreasing these emissions.  And the startling increase in deaths (as well as the likely accompanying developmental disabilities in children) associated with lead exposure must be reversed through ongoing controls, including the removal of lead from motor fuels and paints and better management of electronic waste recycling and disposal around the world.

The Global Burden of Disease Study 2010 (GBD 2010) published in the Lancet in December 2012 has provided an update to the landmark 2000 Global Burden of Disease report published by the World Health Organization (WHO). The 2010 GBD report, fourth in the series, is the largest systematic research endeavor to describe the global distribution and causes of a wide array of major diseases, injuries, and health risk factors and involved nearly 500 researchers from more than 300 institutions in 50 countries.

In this video, Hans Rosling, Swedish medical doctor, academic, and statistician, tells the story of the past 200 years of achievements in lifespan and socio-economic development using interactive data.

Recent extreme weather events have made it abundantly clear that climate change impacts are no longer theoretical, and adapting to them requires both science and strategies that are firmly rooted in the practical. In January, for the first time, the National Institute of Environmental Health Sciences and the U.S. Centers for Disease Control and Prevention, along with the NIH Fogarty International Center, formally brought together grantees working on climate change and human health to discuss ways to bring the best science to bear on protecting public health. For more information, click on the links below: