Fanning the Flames of Research on Cookstoves and Health 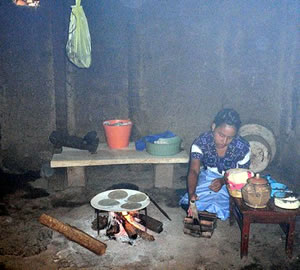 As women in rural Guatemala perform the simple chore of cooking, their lungs, and those of their families fill with smoke and particulate matter. This scene is repeatedly daily in millions of homes around the world, where the poorest three billion people burn wood, dung and other biomass indoors and around their homes for cooking and heating. According to the recently released Global Burden of Disease report, nearly four million people around the world, mostly women and children, die every year as a result. Many more suffer illnesses and disabilities as a result of breathing pollutant-laced smoke.

Addressing the problem of household air pollution is a priority among NIEHS’s global environmental health activities. Projects funded and supported by NIEHS are underway in Guatemala, India, Nepal and Ghana. Additionally, NIEHS is working with partners from academia, governments, and non-profits to advance the science on cookstove exposures and help to apply it to solutions to this deadly problem, including by participating in the Global Alliance for Clean Cookstoves , an international public-private collaboration supported by Secretary of State Hillary Clinton and the United Nations Foundation, among others.

“The studies we have so far suggest that even halving exposures to household air pollution only improves health outcomes a little bit,” said John Balbus, M.D., M.P.H., senior advisor at NIEHS. “We need studies that can more confidently assess exposures in order to gain confidence that we know how clean a stove has to be to really protect women and children.”

Improving the quality and efficiency of cookstoves in not just a public health issue, added Balbus, but also an environmental issue due to damage to local forest ecosystems, a climate change issue due to black carbon emissions, a women and children’s rights issue—in war zones women and children risk their lives to collect fuel and time spent by children gathering fuel is time diverted from studies, and a poverty alleviation issue as time spent by women gathering fuel is time diverted from income generating activities.

The stakes are high, but so too are the potential life-saving results, said NIH Director Francis S. Collins, M.D., Ph.D., at an international workshop and training seminar sponsored last fall by NIEHS, NIH’s Fogarty International Center (FIC), and the National Institute of Child Health and Disease. “An army of people with scientific and technical skills is needed to win this battle. But working together we can save millions of lives,” said Collins.

Spark of an Idea

University of California at Berkeley professor Kirk R. Smith, Ph.D., M.P.H., is an NIEHS grantee and one of the world’s leading experts on household air pollution. According to Smith, NIEHS had to “think out of the box” when it funded its first cookstove study in Guatemala more than a decade ago.  Although prevention of disease is the core of NIEHS’s unique mission within NIH, Smith said his proposal was still a bit of a stretch. “At the beginning, we didn’t have a plan involving biomarkers, genetic interactions, biochemical pathways, and other such things considered ‘science,’ and everyone else had turned us down,” he said. “We’ve gotten to that point now, but in the early days, our approach was simple.”

Smith and his team’s study in villages in the remote mountains of Guatemala included the first randomized trial of interventions to reduce air pollution caused by cookfires.  Their ongoing work in Guatemala continues to yield some of the most important insights into the relationships between exposures and diseases. For instance, measurements they made showed that cookstove fires were producing about the same pollution per hour as 1,000 burning cigarettes. In one of many papers published from the ongoing study, Smith’s team also documented that as exposures rise, childhood pneumonia soars. He notes that pneumonia is the leading cause of death of children worldwide.

In one study, the team introduced an efficient chimney stove and found that particle matter concentrations in kitchens went down by a factor of ten. However, when they measured what people were actually exposed to, and found that number went down only by a factor of two. “That’s because people move around the house, and those stoves don’t eliminate the smoke, they just reduce it and move the rest around,” said Smith. “Clean combustion is the answer. A better stove is not enough; it must be so much better that health outcomes are changed drastically.” 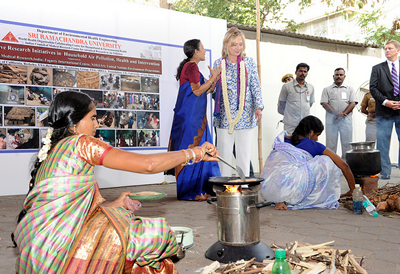 In India, the effects of household air pollution on pregnant women and babies is being led by Kalpana Balakrishnan, PhD, a professor of environmental health engineering at Sri Ramachandra University in Chennai, who collaborates with Smith and other NIEHS-funded researchers. “What started as a little project more than a decade ago has grown to a national and global level thanks to the help of the Fogarty Center and NIEHS,” said Balakrishnan, who in 2011 demonstrated clean cookstoves to Secretary of State Hillary Clinton.

The studies in India are looking primarily at low birth weight, neonatal mortality, gestational age and acute lower respiratory infections in children under two. The studies are also intended to build exposure models, so that future health studies can estimate exposures of particular households and communities based on a set of determinants such as type of fuel, family size, type of kitchen, and whether the community is also exposed to traffic pollution.

Last fall’s international workshops were critical in “facilitating how to move forward in terms of exposure assessments and the design of interventions, including better cookstoves,” said Balakrishnan.

Currently, stoves that work in the field and are efficient enough to change health outcomes are “like unicorns,” says Smith. “There are sightings, but they aren’t yet in the stables.” Specifically, he says there are very promising stoves that perform well in laboratory settings, but more work needs to be done in the field. Moreover, stoves must be adapted to fit different geographic and cultural needs. To be sustainable, the stove must be able to utilize locally available fuels, and it must be adapted to cook different kinds of food that are staples in a particular place, it must be easily maintained by local users, and users must be trained in culturally effective ways to convince them to change traditional cooking practices.

What Does “Sustainable Development” Mean to You? Participants in a webinar by the Institute of Medicine and NIEHS Global Environmental Health and Sustainable Development Innovation Collaborative were asked to answer this question in six words or less. The word cloud above illustrates their answers. The font weight of a word correlates to the number of times it was given in a response. The varying colors are just to enhance readability.

A Slow but Steady Burn of Research

The hazards of indoor solid fuel combustion are many—it has been linked to respiratory disease, low birth weight, cancers, heart disease, cataracts, blindness, and burns. Solid fuel smoke contains black carbon and carbon dioxide, pollutants that are active in climate change and contribute to the melting of glaciers. Up to half of outdoor air pollution in India and 30% in China may be coming from indoor sources, according to Smith. Overall, 20% of black carbon comes from burning biomass for cooking.

But knowing that a practice is associated with disease is not the same as knowing how to intervene to protect people.  Additional understanding of how much exposure and what constituents of solid fuel smoke are responsible for causing illness is needed. Moreover, demonstrating the efficacy of proposed solutions in a scientifically rigorous way is critical to convincing governments and funders to provide the substantial resources that will be required to improve the lives of the poorest billion people on the planet.

In Guatemala, as well as in NIEHS-funded studies in development in Nepal and Ghana, health data obtained before and after interventions are being collected and analyzed. In their Guatemala study, Smith’s team is continuing to publish papers of the effects of household air pollution on blood pressure, heart disease, and cognitive effects on children. In Nepal, NIEHS-funded researchers will be studying 1,800 households and the effects on household air pollution on the rates of tuberculosis—one of the world’s biggest killers. NIEHS-funded researchers are also investigating the health effects associated with burning kerosene, which is another major source of fuel in the developing world.  [See related Science Spotlight.]

Explaining the importance of scientifically measuring effects, Smith notes that in India, the government is providing vitamins and other prenatal care to improve birth outcomes. “If we can show the benefits we expect to find by providing improved cookstoves to pregnant women,” he said, “the minister of health said he’d be happy to pay $50 for such a stove, because it would be cost effective.”

Ultimately, finding solutions to household air pollution may not be easy, said NIEHS Director Linda Birnbaum, PhD. However, she added, “The alternative, which is death and disability on a massive scale, requires us to act, and act quickly.”