Vectorborne and zoonotic diseases (VBZD) are infectious diseases whose transmission involves animal hosts or vectors. Vectorborne diseases, such as malaria, are those in which an organism, typically insects, ticks, or mites, carry a pathogen from one host to another, generally with increased harmfulness (virulence) of the pathogen in the vector. Zoonoses, such as Avian Flu, are diseases that can be transmitted from animals to humans by either contact with the animals or through vectors that carry zoonotic pathogens to from animals to humans. While many VBZD, such as malaria, yellow fever, dengue, and murine typhus, are rarely seen in the United States, we are directly susceptible to VBZD that are found in warmer climates and vulnerable due to global trade and travel. Many VBZD are climate sensitive and ecological shifts associated with climate change are expected to impact the distribution and incidences of these diseases. 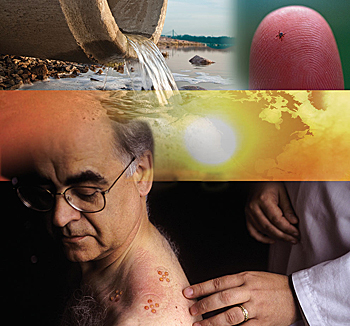 For more information, please visit the chapter on Vectorborne and Zoonotic Diseases in A Human Health Perspective on Climate Change (Full Report) (4MB).