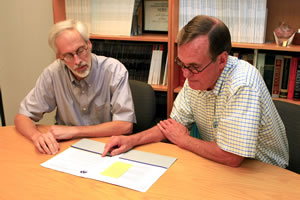 In September 2008, the National Toxicology Program (NTP) completed a review of available research on the chemical bisphenol A (BPA) and concluded that there was “some concern for effects on the brain, behavior, and prostate gland in fetuses, infants, and children at current human exposures.”

There were four factors that led us to undertake this evaluation. First, bisphenol A is a high production volume chemical. Second, the vast majority of people in the United States are exposed to bisphenol A. Third, there is a large scientific literature reporting studies on the reproductive and developmental toxicity of bisphenol A. And fourth, there's a high level of public concern about potential public health effects of bisphenol A.

Shelby describes how BPA gets into the body.

How BPA Enters the Body

Bucher describes what some concern means.

Some concern is actually in the middle part of a five-level concern scale that we have that ranges from "negligible concern" to "serious concern" and it reflects the fact that the scientists that have looked at this information recognize that there is something really going on here, but it's not exactly clear. The evidence that we evaluated during the CERHR review for reproductive and developmental effects of bisphenol A is comprised of a large number of studies in animals, as well as a very, very small number of studies actually looking at the effects of bisphenol A in humans. The studies in humans are really inadequate to reach any kind of a conclusion, but the studies in animals have shown a variety of effects at very, very low levels. When bisphenol A is given to pregnant animals, the offspring of these animals have shown some effects on development and behavioral effects; and although these are not completely understood with regard to how these effects might translate into human, actual human effects and human risks, the fact that we're seeing these at levels of bisphenol A exposures that are not particularly far different from those that are experienced by humans, would indicate to us that these effects can not be completely dismissed at this point.

Our evaluation of bisphenol A is the most difficult and challenging evaluation that we have ever conducted. There is a vast amount of literature that we took under consideration. The expert panel report cited over 500 references. But I think the main problem that we encountered, the problem that kept repeating itself, was having a body of information, of literature on a specific topic, that was in disagreement, that reported conflicting results, that conducted experiments using protocols that prevented us from making valid comparisons of results from one experiment to another.Ultimately it was a few areas where there was some consistency among the effects reported and the exposure levels at which those effects were observed. We felt that the literature available to us justified the conclusions that we reached; and the reasons for that are spelled out in the brief on bisphenol A.

Bisphenol A is metabolized by enzyme systems that change in their activity as humans age and as animals age, so we found that the ability of the body to metabolize and eliminate bisphenol A is much greater in adults than it is in infants and children, so this is one of the reasons that we've expressed some concern over exposures to infants and children, primarily, and negligible concern for reproductive and developmental effects with exposures to adults.

The key conclusions of the report included expression of some concern over the potential for developmental toxicity for fetuses, infants, and children. And this was based primarily on evidence from animal studies that would suggest that there might be effects on the development of the prostate gland, and the brain, and also for the potential for behavioral effects. There was also a lower level of concern, minimal concern, expressed over potential for changes in the development of the mammary gland and also for the age at which females attain puberty. There was also a level of minimal concern expressed for workers exposed in occupational settings. But with the exception of that, exposures to adults were considered to be not particularly risky for exposures to BPA.

It is a long and detailed report and the reason it's long and detailed is that there are so many levels of uncertainty in the information that's been developed on BPA with regards to its risks for human reproduction and development. The fact that there are so many levels of uncertainty make it very difficult for us to make any kind of overall recommendations as to how exactly the U.S. public should view bisphenol A right at this point, but it clearly has also identified a number of research areas that we think need to be followed up on in great detail to give us a better handle and reduce some of these uncertainties and allow a clearer picture of exactly what we should be doing as a society with regards to exposures to BPA.

The Need for More Research

These audio clips and the three images on this webpage are in the public domain and copyright free. Anyone is freely able to use these files. These materials were created by the Office of Communications and Public Liaison of the National Institute of Environmental Health Sciences. As a courtesy, it is requested that an appropriate acknowledgement be given: "Courtesy: National Institute of Environmental Health Sciences."