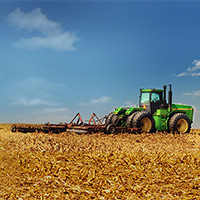 The Agricultural Health Study (AHS) is a prospective study of cancer and other health outcomes in a cohort of licensed pesticide applicators and their spouses from Iowa and North Carolina. The AHS began in 1993 with the goal of answering important questions about how agricultural, lifestyle and genetic factors affect the health of farming populations. The study is a collaborative effort involving investigators from National Cancer Institute, the National Institute of Environmental Health Sciences, the Environmental Protection Agency, and the National Institute for Occupational Safety and Health.

More than 89,000 farmers and their spouses in Iowa and North Carolina have participated in the study. Their participation has provided, and continues to provide, the data that researchers need to help the current and future generations of farmers and their families live healthier lives.

Initial data collection on a prospective cohort of 89,658 study subjects has been completed as of December 1997. Participants completed questionnaires that included items on pesticides used, other agricultural exposures, and work practices that modify exposure as well as on other activities that may affect either exposure or disease risks (e.g., diet, exercise, alcohol consumption, medical conditions, family history of cancer, other occupations and smoking history). Phase II of the study (1998-2003) updated information on occupational exposures, diet, work practices and medical history by means of a computer assisted telephone interview. We also collected buccal cells on sample of 34,000 study participants to assess the effect of inheritable polymorphisms and the interaction of environment and genomic predisposition.

The stimulus for this prospective investigation comes from the growing evidence that, despite a low mortality overall, farmers experience an excess of several cancers. These excesses have been observed in retrospective epidemiological studies among agricultural workers in several countries. Excess cancers are observed for the lymphatic and hematopoietic system, connective tissue, skin, brain, prostate, stomach and lips. Several of these tumors (brain, NHL, multiple myeloma, and prostate) are also increasing in the general population in many of these countries. This suggests a common set of exposures may explain the high rates in farmers and rising rates in the general population.

Farmers, their families, and other pest control workers may have contact with a variety of potentially hazardous substances including pesticides, solvents, fuels and oils, engine exhaust, dust and zoonotic viruses and other microbes. Our cohort study includes all registered pesticide applicators in Iowa and North Carolina and the spouse of applicators who are farmers. The health effects of pesticide use are the primary focus of the study. The influence of other farm exposures are also being evaluated.

The focus of the phase II follow-up period (2004-2008) is to update exposure information and health histories by means of a computer assisted interview and also following the cohort to determine disease incidence and mortality. The cohort is being followed through the cancer registries within Iowa and North Carolina, the Social Security Administration database, state vital statistics offices, National Death Index, and various in-state databases, such as the listing of registered pesticide applicators. Individuals who enrolled into the study but who are no longer at the address given during enrollment (based on subsequent attempts at follow up) have been submitted and will continue to be submitted (through NIOSH) in the standard format to the IRS under their Project 057 Taxpayer Address Request Program. Identifying data provided to the IRS include only SSN and the first four letters of last name of cohort member. IRS provides in return the most current address in IRS records if a match (SSN + all four letter of last name) is found. The purpose of this effort is to identify members of the cohort who have moved out of state, to enable adjustment of person-years for incidence and mortality calculations. Persons who have moved out of state can be followed for vital status and cause of death, but not for cancer incidence.

Continuation of the protocol will provide a valuable epidemiologic resource to help prevent cancers in the future by identifying risk factors in the rural/agricultural environment. Because more cases of important cancer outcomes occur in this cohort every year, potential cancer causes can be evaluated with increased statistical power. Larger number of cases also allows for statistical control of confounding factors, making more meaningful conclusions about cancer risk, and, for some relatively infrequent cancers, such as the lymphomas and leukemias, greater follow-up time is necessary to make any meaningful observations.

To learn more about this study, you or your doctor may contact the study research staff using the Contacts provided below. For general information, see Learn About Clinical Studies.

Please refer to this study by its ClinicalTrials.gov identifier: NCT00352924

For questions about the ongoing AHS Study Follow-up: