The Neurotoxicology Group studies the role of microglia interactions with neurons and the associated immune-mediated responses in brain development and aging as they relate to the initiation of brain damage, the progression of cell death, and subsequent repair/regenerative capabilities. 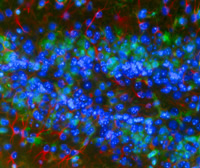 The micrograph depicts the neuronal/glial cell responses to injury in the hippocampus.

Evidence from both the clinic and experimental studies of acute and progressive neurodegenerative diseases indicates that local activation of an immune/inflammatory response plays a major contributory role to both brain injury and repair. The resident immune network of the brain coordinates a diverse array of intra-neural protective host responses as well as pathogenic responses through cell-cell communications that serve to regulate complex processes of initiation, propagation, and suppression of immune and inflammatory responses. This process is normally maintained under tight regulatory control, involving resident cells of the brain and monitoring peripheral immune cells. Under certain pathological states, the immune responses can become spatially and temporally dysregulated, leading to potentially detrimental consequences. However, efforts to downregulate these signals and the microglia often do not provide neuroprotection, but rather can exacerbate the injury, suggesting an alternate neuroprotective role. Understanding the activation of microglia as a defense mechanism against infectious diseases, inflammation, trauma, ischemia, tumors, neurodegenerative processes, or environmental factors is a major goal of the work of the Neurotoxicology Group. In addition, how underlying disease, genetic background, aging, and environmental exposure influence these processes are incorporated into the ongoing studies.

G. Jean Harry, Ph.D., is head of the Neurotoxicology Group. She obtained an M.S. in neuropharmacology from Virginia Commonwealth University with a research focus in drugs of abuse. Her Ph.D. was obtained from VCU in 1981, and bridged the fields of neuropharmacology and neurotoxicology with her research conducted at NIH. Postdoctoral work was conducted in an NIH Training Program in Neuropathology followed by an NIH independent fellowship award in the Biochemistry Department, University of North Carolina. Following a position within the Developmental Disorders Center at UNC, she joined NIEHS as head of Neurotoxicology Group in 1990.