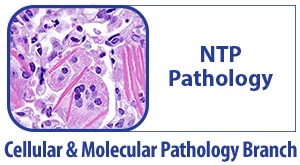 The National Toxicology Program (NTP) Pathology Group functions primarily in support of NTP as well as with other intramural NIEHS investigators. Within NTP, the group participates in and oversees pathology-related issues at all stages of the two-year rodent toxicology/carcinogenesis studies including study design and management, analysis, peer review, and reporting of all pathology-related data generated during the conduct of the studies. With NIEHS investigators the group evaluates, interprets and reports on the mechanisms of disease as well as pathology of genetically altered and other animal models of disease.

The NTP Pathology Group reports on the toxicology and carcinogenesis studies of NTP for public peer review and dissemination. The data is managed by the staff in NTP data coordination unit (DCU). The Technical Report series represents the culmination of the entire NTP bioassay process. The publicly peer reviewed documents and the final book-length monographs, contain the full study details and the formal NTP interpretation of the toxicologic and carcinogenic potential of the substances tested.

Studies include those directed at characterizing the utility of rodent models of disease and identifying environmental hazards as well as investigating the pathogenic mechanisms involved in toxicity or carcinogenesis. Group efforts to explore the utility of genetically altered mice to detect carcinogens in short-term studies, evaluate the immune and reproductive systems, establish standardized nomenclature, and apply rigorous pathology peer review are underway. Collaborative efforts in support of NIEHS intramural scientists have resulted in a number of publications ("/Rhythmyx/assembler/render?sys_contentid=49918&sys_revision=1&sys_variantid=639&sys_context=0&sys_authtype=0&sys_siteid=&sys_folderid=" sys_dependentvariantid="639" sys_dependentid="49918" inlinetype="rxhyperlink" rxinlineslot="103" sys_dependentid="49918" sys_siteid="" sys_folderid="") including characterizing cardiotoxicity, hepatotoxicity, toxicogenomics and elucidating mechanisms of environmental carcinogenesis.

The NTP Pathology Group offers specialty training positions for veterinary pathology trainees and other scientists, as well as externships for veterinary or other students. The NTP and NIEHS are fertile grounds for training in toxicologic pathology and understanding the pathogenesis of environmental disease. Many trainees use microscopic slides from NTP studies and the CMPB laboratories for their training. Additionally, in assessing mechanisms of disease, trainees rotate in CMPB or other NIEHS laboratories such as the Comparative Pathology, Molecular Pathology and Special Techniques, whereby molecular pathology techniques, pathology and electron microscopy interpretation, protein, DNA and RNA techniques, and cell culture procedures are applied.

The training program is led by David Malarkey, D.V.M., Ph.D., D.A.C.V.P. He earned his D.V.M. from Tufts University and Ph.D. from North Carolina State University. He has over 20 years experience in diagnostic pathology and teaching and has mentored over 60 pathology trainees, veterinary students, or graduate students. Malarkey has also published over 100 peer-reviewed articles as well as several book chapters, primarily in the areas of hepatic carcinogenesis, molecular carcinogenesis, and toxicologic pathology. He previously was an NIEHS IRTA fellow (1993-1997) and Assistant Professor of Pathology at North Carolina State University (1997-2002) before re-joining NIEHS in 2002.