Autophagy is an evolutionarily-conserved catabolic pathway designed to preserve a cell’s biosynthetic and energetic function by facilitating the degradation and processing of intracellular contents during times of stress or starvation. Defects in autophagic machinery have been linked with aberrant host defense, inflammatory disease, and age-related disorders. While initial interpretation implicates autophagy in these pathological conditions, recent work demonstrates that a form of non-canonical autophagy, LC3-associated phagocytosis (LAP), is a critical regulator of immunotolerance and a process functionally and molecularly distinct from traditional autophagy. LAP exists at the intersection of the two conserved pathways of autophagy and phagocytosis, wherein the crosstalk between engulfment and processing ultimately shapes the immune response. LAP therefore marries the concepts of phagocytosis and autophagy in a fundamentally new way in which to think about the impact of the autophagy machinery on innate host defense and normal homeostasis. Identification of the LAP-specific gene, Rubcn, and our subsequent generation of the Rubcn-/- mouse as a model of LAP-deficiency (but intact autophagy) allows us to explore the significance of LAP in physiological and pathological settings, though further work is needed to delineate the molecular mechanisms that govern LAP, as well as the molecular mechanisms by which LAP governs inflammation. 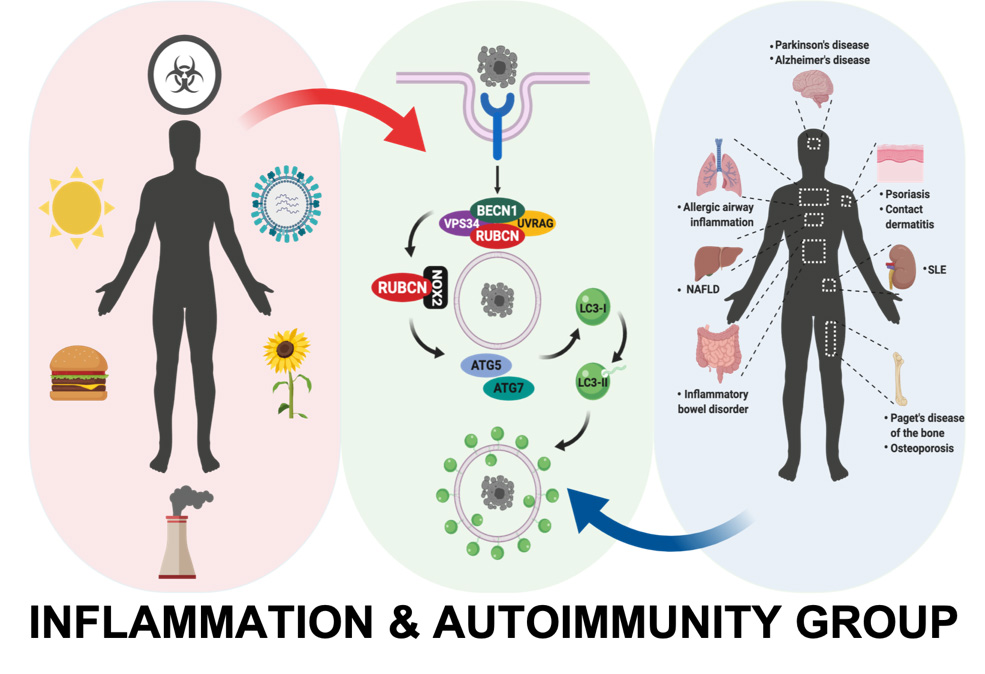 The illustration shows how several proteins are involved in LC3-Associated Phagocytosis (LAP).

This is an emerging field in immunology, and our ability to discriminate between the two processes will have broad applications in tumorigenesis, autoimmunity, and infectious disease. As inhibition of traditional autophagy could be more harmful than beneficial, selective manipulation of LAP could prove to be a tool for immunomodulation. Therefore, it is imperative that the molecular mechanisms that distinguish traditional autophagy and LAP are differentiated, as well as the physiological scenarios in which each is required. In addition to elucidating the mechanisms by which LAP occurs, our long terms goals are to explore the physiological and pathological roles that LAP plays in innate immune function, adaptive immune cell assistance, cellular metabolism, and inflammation.

This research performed in the Inflammation and Autoimmunity Group has garnered national and international recognition, in the form of over 30 invited seminars or conferences, multiple invited reviews and commentaries, and awards, including the Presidential Early Career Science and Engineering (PECASE) to Jennifer Martinez, Ph.D.

Exposure to environmental stresses can induce profound cellular damage, often resulting in cell death. As the defective clearance of cellular corpses contributes to inflammation and the etiology of numerous autoimmune disorders, our hope is that this work will uncover novel approaches for treating disease. By expanding our understanding how our immune system handles stress and damage, this work will provide valuable insight into the crosstalk between environmental cues and immune homeostasis. In addition, we will actively explore the ability of allergens and pathogens to engage non-canonical autophagy, with the goal of providing insight into the development of new, more effective therapies.

Martinez earned her B.S. in Cellular and Molecular Biology from Tulane University in 2001 and her Ph.D. in immunology from Duke University in 2010. She began her work on the autophagy machinery and its role in inflammation and host defense as a postdoctoral fellow in the laboratory of Douglas R. Green, Ph.D., at the St. Jude Children’s Research Hospital, Memphis, Tennessee. After completing her fellowship, she joined the NIEHS Immunity, Inflammation, and Disease Laboratory as a Tenure-track Investigator in 2015.