The Free Radical Metabolism Group studies free radicals, which are atoms or molecules with unpaired electrons in an outer electron shell. Free radicals are constantly formed in the body during normal metabolic processes, and biological systems have evolved to live with, control, and even utilize them. However, when their formation is greatly increased, or protective mechanisms compromised, a state of oxidative stress will result. If oxidative stress is persistent, it will lead to molecular damage and tissue injury. Although oxidative stress is thought to be involved in the pathophysiology of several diseases and aging, to date, molecular mechanisms remain poorly defined and the measurement of oxidative stress in humans has not been established for clinical diagnosis.

The Free Radical Metabolism Group uses electron spin resonance (ESR) and immuno-spin trapping technique to detect and identify free radical metabolism of toxic chemicals, drugs, and biochemicals to unravel the molecular mechanisms that lead to oxidative stress. In addition, the group has become interested in determining measurable, sensitive and specific biomarkers for oxidative damage in rodents, non-human primates, and humans. 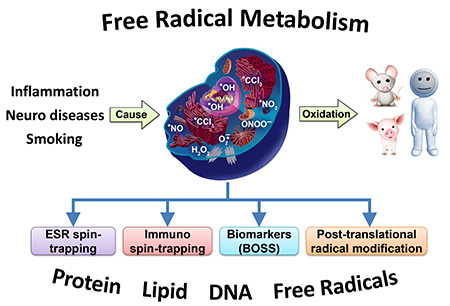 Mason received his B.A. from the University of California-Riverside in 1966 and his Ph.D. in physical chemistry from the University of Wisconsin at Madison in 1972. He has published over 350 peer-reviewed articles in leading biomedical journals, as well as approximately 100 review articles and book chapters. He was an Assistant Professor in the Department of Medicine and Pathology at the University of Minnesota at Minneapolis before joining NIEHS in 1978.

He was named NIEHS Scientist of the Year (508KB) in 2006, and received the Senior Investigator Lifetime Achievement Award from the Society for Free Radical Biology and Medicine (111KB) in 2007. That honor was featured in an NIH Record article. In 2008, he was selected as the NIEHS Mentor of the Year and, in 2010, he won The Bruker Award (Royal Society of Chemistry, ESR Spectroscopy Group, GB). Mason was a gold medalist at the International EPR/ESR Society (IES) meeting in 2011.