RSV is the primary cause for hospitalization during the first year of life, and is the leading cause of bronchiolitis, pneumonia, mechanical ventilation and respiratory failure in infants worldwide. RSV infection is also associated with development of childhood asthma, and recurrent wheezing up to 7 years old. In the U.S. alone, more than 100,000 infants are hospitalized with RSV-induced bronchiolitis each year (Figure 1). Hospitalization rates are highest among premature infants, and those with compromised immune systems, and hospitalization rates due to RSV bronchiolitis have increased by 239 percent in recent decades. While the majority of infected individuals present symptoms, the nature and severity of the symptoms vary. For some infants, infection induces cold-like symptoms, while others require hospitalization that may cause death. Even though some epidemiological risk factors for hospitalization have been identified, mechanisms responsible for severe RSV bronchiolitis remain largely unknown. Variation in RSV titer among inbred strains of mice suggests that genetic background is an important determinant of infection, and association studies in human cohorts suggest genetic background is an important risk factor for RSV disease severity, but the mechanisms of susceptibility remain unclear.

The overall objective of this project is to utilize inbred mice and a cell model to determine the genetic mechanisms of differential susceptibility to RSV infection and disease severity, and to utilize genetic information to determine whether functional polymorphisms in candidate genes associate with RSV disease severity in a human cohort. This objective requires a multi-disciplinary approach that applies molecular biology and genetic techniques to in vivo and in vitro models.

The specific aims are to: 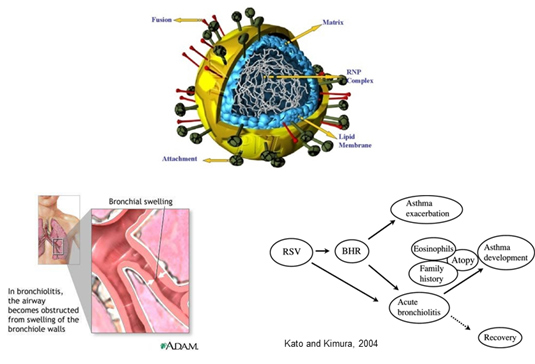 Ongoing Projects in the Laboratory:

We have developed a genetic mouse model of RSV disease by infecting 30 inbred strains with RSV-19 (1x106 pfu) or vehicle control (Hep 2 cells in 50μL of HBSS) and evaluated disease phenotypes 1 and 5 days after infection Significant inter-strain variation in protein, cellular, mucus cell metaplasia (MCM), and RSV-N mRNA expression phenotypes was found among the strains, and haplotype association mapping (HAM) of the traits has identified quantitative trait loci (QTL) for each of the phenotypes, and candidate genes have been identified and validated for some of the traits. We have also found that functional single nucleotide polymorphisms in human homologues of the murine susceptibility genes associate with RSV disease severity in children. These studies demonstrate the translational value of the model to better understand susceptibility to human RSV disease.

Role of Nrf2 in RSV disease

Recent studies have shown that RSV infection enhanced production of ROS (e.g., superoxide anions, hydrogen peroxides, lipid peroxides) in inflammatory cells and in cultured airway cells, suggesting a role for oxidative stress in RSV pathogenesis. Although phosphorylational activation of STATs 1 and 3 are involved in RSV-induced ROS signal transduction, details of molecular and cellular mechanisms underlying airway oxidative stress by RSV have not been elucidated. Continuing our investigations in the role of Nrf2 in lung environmental lung disease, we tested whether Nrf2- and ARE-driven downstream mechanisms have a cytoprotective role in RSV disease ( (Cho et al, 2009 ). Nrf2-/- and Nrf2+/+ mice were intranasally instilled with RSV or vehicle. Compared with Nrf2+/+ mice, we found significantly attenuated viral clearance, antioxidant induction, and IFN-γ, and increased RSV disease in Nrf2-/- mice after infection (Figure 2). Furthermore, pretreatment with sulforaphane (which induces Nrf2 and related antioxidant enzymes) significantly reduced viral gene replication and lung inflammation against RSV infection in Nrf2+/+ compared to Nrf2-/- mice. This study supports an association of oxidant stress with RSV pathogenesis and a key role for the Nrf2-ARE pathway in host defense against RSV. Targeting oxidative stress may limit pulmonary RSV infectivity and suggests a potential novel therapeutic target for RSV disease treatment. 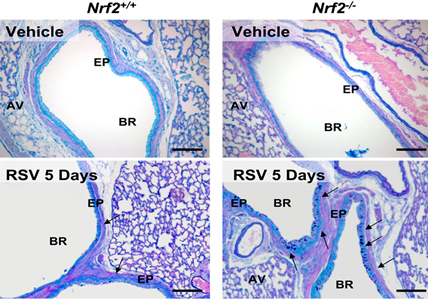