Group B Streptococcus agalactiae (GBS) is an opportunistic pathogen largely affecting infants, and elderly or immunocompromised adults—leading to sepsis, meningitis, and death. The Group A bacterium Streptococcus pyogenes is a leading cause of over 160,000 deaths annually worldwide, due severe invasive infections including streptococcal toxic shock syndrome and necrotizing fasciitis. These hyper-virulent Streptococcal stains have developed a number of defenses against the host immune system, including the secretion of nucleases GBS_NucA and Sda1, that degrade neutrophil extracellular traps (NETs) extruded by neutrophils which are rich in chromatin material. The ability to degrade these NETS protects invading bacteria from the innate immune response. The fact that these nucleases are virulence factors, rather than essential enzymes for bacterial survival makes them interesting drug targets. Inhibiting of Sda1 could lead to reduced virulence allowing the host immune system to kill off the infection. Ideally, a drug that targets these secreted nucleases externally from the bacterium itself would maintain the delicate balance of the gut microbiome, and reduce many of the deleterious side effects associated with conventional antibiotics. In or lab, we determined the crystal structures of GBS_NucA and Sda1 and characterized a variety of mutants to better understand how these nucleases function. These crystal structures provide a template for modeling DNA binding and revealed a number of differences specific to each nuclease, in comparison to similar enzymes. From these structures, we were able to identify key residues involved in catalysis as well as DNA binding. We strive to obtain crystal structures of Streptococcal nucleases with bound DNA substrates, in order to map potential drug binding sites. 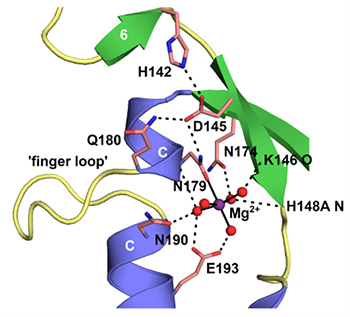 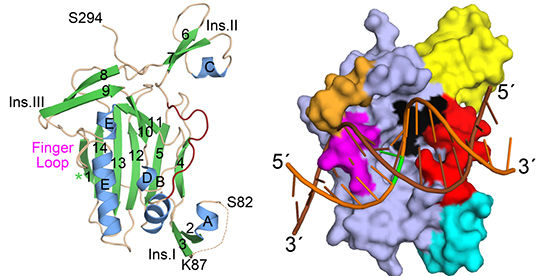 Figure 2: Structural characterization of Sda1 (H188G) catalytic domain. A ribbon diagram of the DNA binding-face of the Sda1 nuclease (left), with the secondary structure elements shown (α-helices in blue, labeled alphabetically; β-strands in green, labeled numerically; coils in khaki). Key structural features (Finger Loop in magenta; substrate binding loop in red; and three insertion regions not found in other Streptococcal nucleases). Right, a surface rendering of the Sda1 catalytic domain, with a DNA substrate modeled onto the structure. The likely position of DNA strand cleavage is marked in green. The location of the catalytic residues (black), substrate binding loop (red), finger loop (magenta), and the three insertion regions (cyan, yellow, and orange, respectively) are also shown.