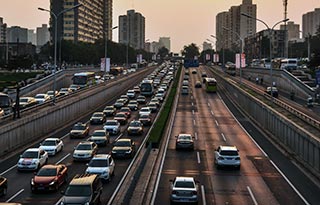 Long-term exposure to air pollution was linked to increases in emphysema between 2000 and 2018, according to a new study funded by the National Institute of Environmental Health Sciences (NIEHS) and the National Heart, Lung, and Blood Institute (NHLBI), both part of the National Institutes of Health. Emphysema, usually associated with smokers, is a chronic disease in which lung tissue is destroyed and unable to effectively transfer oxygen in the body. The study is published in The Journal of the American Medical Association.

“These findings may offer one explanation for why emphysema is found in some people who never smoked,” said James Kiley, Ph.D., NHLBI’s director of the Division of Lung Diseases. “The study’s results, duration, and timing offer insight into the long-term effects of air pollution on the U.S. population.”

Researchers measured all major air pollutants with longitudinal increases in percent emphysema revealed by more than 15,000 CT scans acquired from 2000 to 2018. Over the same period, MESA carefully tracked air pollution. MESA is unique in its meticulous characterization of air pollution exposures along with repeated CT scans of lungs in study participants.

“Air pollution is a significant public health concern around the world,” said Gwen Collman, Ph.D., director of NIEHS’ Division of Extramural Research and Training. “It’s been a priority of NIEHS research for many years, so it’s great when we can accelerate our efforts by joining with other NIH institutes in supporting research on lung disease.”

Emphysema is a debilitating disease, and people with emphysema have difficulty breathing along with a persistent cough and phlegm. It makes physical and social activities difficult, creates work hardships, and may result in detrimental emotional conditions. Its development can be a slow, lifelong process. Emphysema is not curable, but treatments help manage the disease.

Understanding and controlling emphysema may lead to better treatment.

“It’s important that we continue to explore factors that contribute to emphysema, particularly in a large, multi-ethnic group of adults such as those represented by MESA,” Kiley said.

“We need to assess the effectiveness of strategies to control air pollutants in our efforts to improve heart and lung health,” said David Goff, M.D., Ph.D., director of NHLBI’s Division of Cardiovascular Sciences. “At the same time, people need to remember the importance of a healthy diet, physical activity, and smoking cessation for overall health.”

This study also included support from the U.S. Environmental Protection Agency as part of their MESA Air and MESA Air Next Stage project.

About the National Heart, Lung, and Blood Institute (NHLBI): NHLBI is the global leader in conducting and supporting research in heart, lung, and blood diseases and sleep disorders that advances scientific knowledge, improves public health, and saves lives. For more information, visit www.nhlbi.nih.gov.