Two proteins that bind to stress hormones work together to maintain a healthy heart in mice, according to scientists at the National Institutes of Health and their collaborators. 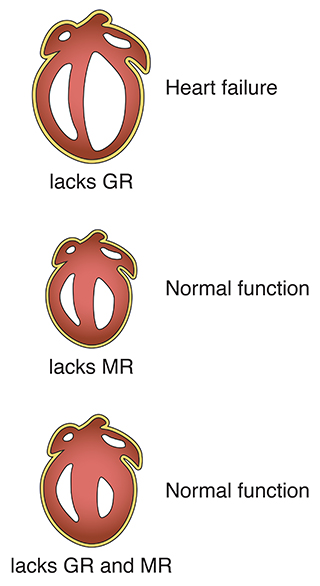 Without the glucocorticoid receptor (GR), the mouse heart is enlarged, and the animal eventually has heart failure (top). However, a heart that lacks the mineralocorticoid receptor (MR)(middle) or both receptors (bottom) functions normally.
(Photo courtesy of NIEHS)

Two proteins that bind to stress hormones work together to maintain a healthy heart in mice, according to scientists at the National Institutes of Health and their collaborators. These proteins, stress hormone receptors known as the glucocorticoid receptor (GR) and mineralocorticoid receptor (MR), act in concert to help support heart health. When the signaling between the two receptors is out of balance, the mice have heart disease. The work, published April 16 in Science Signaling, may lead to the development of therapeutic compounds that help people with an increased risk of a heart attack.

Stress increases risk of dying from heart failure by inducing adrenal glands to make a hormone called cortisol. Cortisol is involved in the fight-or-flight response and binds to GRs and MRs in different tissues of the body to reduce inflammation, among other functions. If the level of cortisol remains too high over a long period of time, common risk factors for heart disease may arise, such as increased cholesterol and glucose in the blood and high blood pressure.

Lead author Robert Oakley, Ph.D., first identified a malfunctioning GR in the 1990s when he was a graduate student working with John Cidlowski, Ph.D., at the University of North Carolina at Chapel Hill. Soon after the discovery, other scientists determined that people with above average amounts of this altered GR had greater risk of heart disease. Based on this finding, Oakley and Cidlowski tested a mouse strain without heart GR in their lab at the National Institute of Environmental Health Sciences (NIEHS), part of NIH. These animals spontaneously developed enlarged hearts leading to heart failure and death. When the team produced a mouse strain missing cardiac MR, the animals’ hearts functioned normally.

Oakley and Cidlowski then wondered what would happen if both receptors were missing from heart tissue, so they made another mouse strain that lacked GR and MR. They guessed that these double-knockout mice would have the same or worse heart problems as the mice without GR.

"To our surprise the hearts were resistant to heart disease," Oakley said.

Cidlowski theorized why the double-knockout mice appeared to be protected against heart disease. He said these mice did not have the gene changes that lead to heart failure as seen in mice lacking GR, while simultaneously exhibiting a gain in function of genes that protect the heart. Although the hearts of these mice function normally, they are slightly enlarged compared to the hearts with no MR.

The end goal, however, is treating people with heart disease. Cidlowski said, in the past, when researchers designed synthetic hormones for this task, they made molecules that only worked on one receptor.

"We propose that since GR and MR cooperate, a better approach is to make a drug that works on both receptors simultaneously," Cidlowski said. "It could help patients with heart disease and prevent subsequent heart diseases."