Finding may lead to a precision medicine approach in environmental health

Asthma patients, with a specific genetic profile, exhibit more intense symptoms following exposure to traffic pollution, according to researchers at the National Institutes of Health and collaborators. The study appeared online in Scientific Reports. 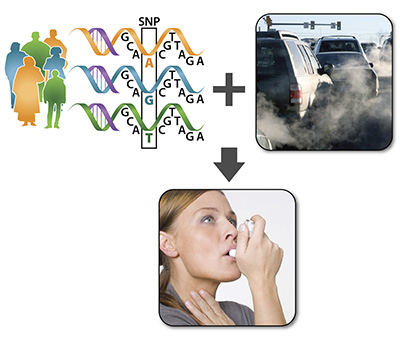 The research suggests when individuals with specific variations in certain genes are exposed to traffic pollution, they display more intense asthma symptoms than people that lack those same gene variations.
(Photo courtesy of NIEHS)

The research team, made up of scientists from the National Institute of Environmental Health Sciences (NIEHS), part of NIH, and Rice University, Houston, also found that asthma patients that lack this genetic profile do not have the same sensitivity to traffic pollution and do not experience worse asthma symptoms. The work brings scientists closer to being able to use precision medicine, an emerging field that intends to prevent and treat disease based on factors specific to an individual.

Co-lead author Shepherd Schurman, M.D., associate medical director of the NIEHS Clinical Research Unit, stated the results are based on genetic variation, the subtle differences in DNA that make each person unique. He further added that to understand the concept, one should think of human genes, which are made up of DNA base pairs A, C, G, and T, as written instructions for making proteins.

"All humans have the same genes, in other words the same basic instructions, but in some people one DNA base pair has been changed," Schurman said. "This common type of genetic variation is called a single nucleotide polymorphism or SNP, and it can alter the way proteins are made and make individuals more or less prone to illness."

Schurman is also head of the Environmental Polymorphisms Registry (EPR), the DNA bank in North Carolina that provided volunteers for the study. The EPR studies how SNPs impact disease risk in combination with environmental exposures.

Together with NIEHS colleague and lung disease expert Stavros Garantziotis, M.D., medical director of the NIEHS Clinical Research Unit, the two scientists examined four SNPs that are involved in a biochemical pathway that leads to inflammatory responses in the body. They explained that SNPs are usually studied one at a time, but they wanted to learn if different combinations of these SNPs, along with pollution exposure, could worsen symptoms in a person with an inflammatory disease like asthma.

Schurman and Garantziotis gathered information about the SNPs, severity of asthma symptoms, and residential addresses of 2,704 EPR participants with asthma. Using the SNPs data, they divided the participants into three groups: hyper-responders, or those very sensitive to air pollution and likely to develop inflammation; hypo-responders, or those insensitive to air pollution and less likely to develop inflammation; and those in between. With the help of collaborators at Rice University, the team used the participants’ addresses to calculate their distance from a major road. Participants were categorized depending on whether they lived more or less than 275 yards from a major roadway. Data suggest that air pollution levels are elevated closer to major roads.

The researchers found that asthma sufferers who were hyper-responders and lived closer to heavily travelled roads had the worst asthma symptoms, such as difficulty breathing, chest pain, cough, and wheezing, compared to the other groups. In contrast, asthma patients who were hypo-responders and lived further away from busy roads had milder symptoms. Garantziotis concluded the work could greatly enhance the quality of life for people with asthma.

"Based on this research, we could propose that hyper-responders, who are exposed to traffic pollution, receive air purification intervention, such as HEPA filters, for their home," Garantziotis said.

NIEHS Clinical Director Janet Hall, M.D., said the results emphasize the importance of gene-environment interactions in the progression of disease.

"This research is a great example of how we can approach disease prevention on a personal level, and tailor our treatments to suit individual patients," she said. "That way we can be more efficient with our treatments and preventative measures, while at the same time cutting health care costs."