Allergens are widespread, but highly variable in U.S. homes, according to the nation’s largest indoor allergen study to date. Researchers from the National Institutes of Health report that over 90 percent of homes had three or more detectable allergens, and 73 percent of homes had at least one allergen at elevated levels. The findings were published November 30 in the Journal of Allergy and Clinical Immunology.

“Elevated allergen levels can exacerbate symptoms in people who suffer from asthma and allergies, so it is crucial to understand the factors that contribute,” said Darryl Zeldin, M.D., senior author and scientific director at the National Institute of Environmental Health Sciences (NIEHS), which is part of NIH.

They found that the presence of pets and pests had a major influence on high levels of indoor allergens. Housing characteristics also mattered – elevated exposure to multiple allergens was more likely in mobile homes, older homes, rental homes, and homes in rural areas.

For individual allergens, exposure levels varied greatly with age, sex, race, ethnicity, and socioeconomic status. Differences were also found between geographic locations and climatic conditions. For example, elevated dust mite allergen levels were more common in the South and Northeast, and in regions with a humid climate. Levels of cat and dust mite allergens were also found to be higher in rural areas than in urban settings.

To provide a more complete picture, the research team also compared allergen exposure and previously reported sensitization patterns from this survey. Sensitization, which makes a person’s immune system overreactive to allergens, may increase the risk of developing allergies and asthma. NHANES 2005-2006 allowed national level comparisons of exposure and sensitization for the first time.

The team uncovered several differences. Although males and non-Hispanic blacks were less likely to be exposed to multiple allergens, sensitization was more common in these groups, compared to females and other racial groups, respectively. Patterns also differed for urban and rural settings. Exposure to several elevated allergens was most prevalent in rural areas, whereas sensitization rates were shown to be higher in urbanized areas.

The researchers emphasized that the relationships between allergen exposures, allergic sensitization, and disease are complex. Studies are still investigating how allergen exposures interact with other environmental and genetic factors that contribute to asthma and allergies.

In the meantime, the following preventive actions may help reduce exposure to indoor allergens and irritants.

“Asthma and allergies affect millions of Americans,” said Salo. “We hope this comprehensive study provides beneficial information to a wide audience, from patients to clinicians.” 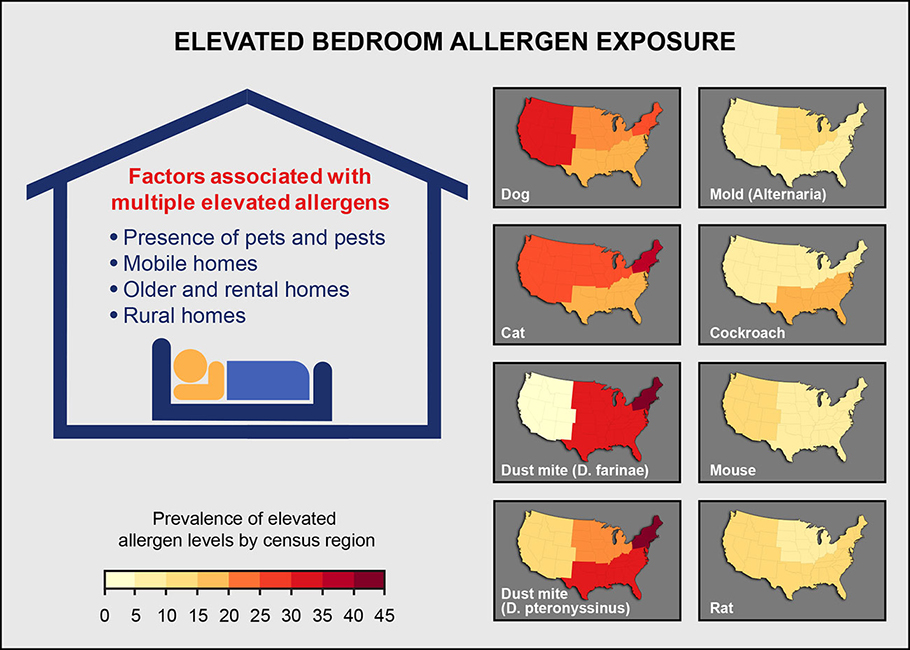 Next Release
Defending Against Environmental Stressors May Shorten Lifespan