A protein called COUP-TFII determines whether a mouse embryo develops a male reproductive tract, according to researchers at the National Institutes of Health and their colleagues at Baylor College of Medicine, Houston. The discovery, which appeared August 18 in the journal Science, changes the long-standing belief that an embryo will automatically become female unless androgens, or male hormones, in the embryo make it male.

Humphrey Hung-Chang Yao, Ph.D., head of the Reproductive Developmental Biology Group at the National Institute of Environmental Health Sciences (NIEHS), part of NIH, studies how male and female mouse embryos acquire their sex-specific reproductive systems. He said all early-stage mammalian embryos, regardless of their sex, contain structures for both male and female reproductive tracts. For a mouse or human to end up with the reproductive tract of one sex after birth, the other tract has to disintegrate.

Since the 1950s, scientists have believed that androgens produced by embryonic testes, promote the survival of the male reproductive tract. The scientific consensus favored a female by default scenario, in which the absence of androgens in female embryos resulted in the breakdown of the male reproductive tract. However, Yao's work demonstrated that female embryos actively promote the elimination of the male tract through the action of COUP-TFII, challenging the female by default theory.

The evidence comes from a mouse model created by Yao and his group. The mice lack COUP-TFII in an embryonic structure that develops into distinct male and female reproductive ducts. To the surprise of Yao and his visiting fellow Fei Zhao, Ph.D., who is also lead author on the paper, female mouse embryos without COUP-TFII displayed both male and female ducts. Control females with COUP-TFII appropriately exhibited only the female duct.

Since Yao and his team did not find any evidence of androgen production in female mice without COUP-TFII, they concluded that the presence of the male reproductive tract in female embryos lacking COUP-TFII occurs without androgen.

"This work is just the beginning and many interesting questions remain unanswered," Zhao said. "We will continue to study how the embryo develops a functional reproductive system."

Yao's group plans to use mouse models to examine how birth defects of the reproductive system originate. These birth defects lead to disorders of sexual development (DSD), which include common defects, such as cryptorchidism, or undescended testicles, as well as the genetic disorders Klinefelter Syndrome and Turner Syndrome.

"Individuals with DSD may have developmental challenges due to the presence of intersex organ systems," said Kenneth Korach, Ph.D., head of the NIEHS Reproductive and Developmental Biology Laboratory. "With its highly novel approach and unexpected findings, Yao's research has important implications for understanding the potential causes of these conditions." 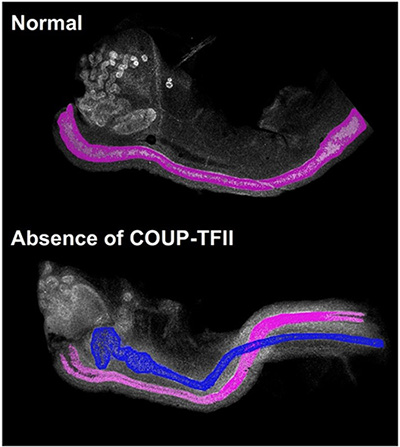