Using a new imaging technique, National Institutes of Health researchers have found that the biological machinery that builds DNA can insert molecules into the DNA strand that are damaged as a result of environmental exposures. These damaged molecules trigger cell death that produces some human diseases, according to the researchers. The work, appearing online Nov. 17 in the journal Nature, provides a possible explanation for how one type of DNA damage may lead to cancer, diabetes, hypertension, cardiovascular and lung disease, and Alzheimer’s disease.

Time-lapse crystallography was used by National Institute of Environmental Health Sciences (NIEHS) researchers to determine that DNA polymerase, the enzyme responsible for assembling the nucleotides or building blocks of DNA, incorporates nucleotides with a specific kind of damage into the DNA strand. Time-lapse crystallography is a technique that takes snapshots of biochemical reactions occurring in cells.

Samuel Wilson, M.D., senior NIEHS researcher on the team, explained that the damage is caused by oxidative stress, or the generation of free oxygen molecules, in response to environmental factors, such as ultraviolet exposure, diet, and chemical compounds in paints, plastics, and other consumer products. He said scientists suspected that the DNA polymerase was inserting nucleotides that were damaged by carrying an additional oxygen atom. 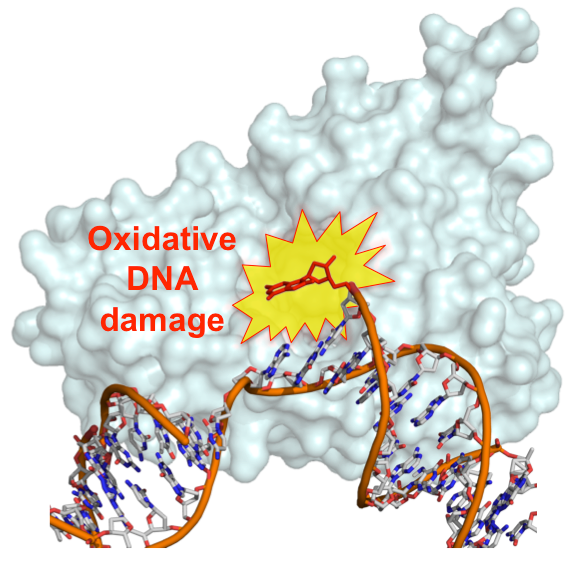 “When one of these oxidized nucleotides is placed into the DNA strand, it can’t pair with the opposing nucleotide as usual, which leaves a gap in the DNA,” Wilson said. “Until this paper, no one had actually seen how the polymerase did it or understood the downstream implications.”

Wilson and his colleagues saw the process in real time, by forming crystal complexes made of DNA, polymerase, and oxidized nucleotides, and capturing snapshots at different time points through time-lapse crystallography. The procedure not only uncovered the stages of nucleotide insertion, but indicated that the new DNA stopped the DNA repair machinery from sealing the gap. This fissure in the DNA prevented further DNA repair and replication, or caused an immediate double-strand break.

“The damaged nucleotide site is akin to a missing plank in a train track,” Wilson said. “When the engine hits it, the train jumps the track, and all of the box cars collide.”

Large numbers of these pileups and double-strand breaks are lethal to the cell, serving as a jumping off point for the development of disease. However, it can be a good thing if you are a researcher trying to destroy a cancer cell.

“One of the characteristics of cancer cells is that they tend to have more oxidative stress than normal cells,” said Bret Freudenthal, Ph.D., lead author of the paper and postdoctoral fellow in Wilson’s group. “Cancer cells address the issue by using an enzyme that removes oxidized nucleotides that otherwise would be inserted into the genome by DNA polymerases. Research performed by other groups determined if you inhibit this enzyme, you can preferentially kill cancer cells.”