A set of proteins involved in the body’s natural defenses produces a large number of mutations in human DNA, according to a study led by researchers at the National Institutes of Health. The findings suggest that these naturally produced mutations are just as powerful as known cancer-causing agents in producing tumors.

The proteins are part of a group called apolipoprotein B mRNA-editing enzyme catalytic polypeptide-like (APOBEC) cytidine deaminases. The investigators found that APOBEC mutations can outnumber all other mutations in some cancers, accounting for over two-thirds in some bladder, cervical, breast, head and neck, and lung tumors. 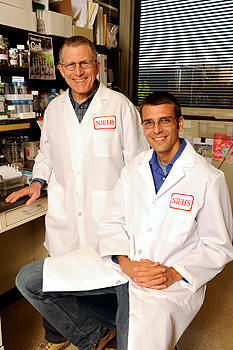 The scientists published their findings online July 14 in the journal Nature Genetics. Dmitry Gordenin, Ph.D., is corresponding author of the paper and a senior associate scientist at the National Institute of Environmental Health Sciences (NIEHS), part of NIH. He said scientists knew the main functions of APOBEC cytidine deaminases were to inactivate viruses that attack the body and prevent ancient viruses present in the human genome from moving around and causing disrupting mutations. Because they are so important to normal physiology, he and his collaborators were surprised to find a dark side to them — that of mutating human chromosomal DNA.

The study is a follow-up to one Gordenin and his group published in Molecular Cell in 2012, after they discovered APOBECs could generate clusters of mutations in some cancers.

“The presence of APOBEC clusters in the genome of tumor cells indicates that APOBEC enzymes could also have caused many mutations across the genome," Gordenin said.

Gordenin’s team at NIEHS, comprised of scientists from the Chromosome Stability Group, headed by Michael Resnick, Ph.D., and the Integrative Bioinformatics Group, headed by David Fargo, Ph.D., took the 2012 research one step further by applying a modern data science approach.

The group collaborated with co-corresponding author Gad Getz, Ph.D., and other colleagues from the Broad Institute of MIT and Harvard, Cambridge, Mass. They looked for signs of genome-wide APOBEC mutagenesis in cancers listed in The Cancer Genome Atlas, a cancer database funded and managed by the National Cancer Institute and the National Human Genome Research Institute, both part of NIH.

Using APOBEC’s distinctive DNA mutational signature, they examined approximately 1 million mutations in 2,680 cancer samples, and found that, in some tumors, nearly 70 percent of mutations in a given specimen resulted from APOBEC mutagenesis. The mutation pattern, which appeared in clusters and individual mutations, could affect many cancer-associated genes.

Steven Roberts, Ph.D., a postdoctoral fellow who works with Gordenin, is first author on both studies. He explained that since APOBECs are regulated by the immune system, which is responsive to many environmental factors, he believes there may be a significant environmental component to APOBEC mutagenesis.

“We hope that determining the environmental link to these mutations will lead to viable cancer prevention strategies,” Roberts said.

In upcoming work, he and Gordenin plan to address why APOBEC mutagenesis appears in some cancer types and not others.

Dr. Roberts describes APOBEC proteins and their function in the human body.


Dr. Gordenin explains how the field known as data science made these research findings possible.