Chemical in Many Air Fresheners May Reduce Lung Function

New research shows that a chemical compound found in many air fresheners, toilet bowl cleaners, mothballs and other deodorizing products, may be harmful to the lungs. Human population studies at the National Institute of Environmental Health Sciences (NIEHS), a part of the National Institutes of Health, found that exposure to a volatile organic compound (VOC), called 1,4 dichlorobenzene (1,4 DCB) may cause modest reductions in lung function.

"Even a small reduction in lung function may indicate some harm to the lungs," said NIEHS researcher Stephanie London, M.D., lead investigator on the study. "The best way to protect yourself, especially children who may have asthma or other respiratory illnesses, is to reduce the use of products and materials that contain these compounds."

The researchers examined the relationship between blood concentrations of 11 common volatile organic compounds and lung function measures in a representative sample of 953 adults. VOCs are a diverse set of compounds emitted as gases from thousands of commonly used products, including tobacco smoke, pesticides, paints, and cleaning products. VOCs are also released through automotive exhaust. The researchers found that of the common VOCs analyzed, which included benzene, styrene, toluene, and acetone, only the compound 1,4 DCB was associated with reduced pulmonary function and this effect was seen even after careful adjustment for smoking, The researchers found that 96 percent of the population samples had detectable 1,4 DCB blood concentration levels. African Americans had the highest exposure levels and non-Hispanic whites the lowest.

This particular VOC, 1,4 DCB, is a white solid compound with a distinctive aroma, similar to mothballs. It is typically used primarily as a space deodorant in products such as room deodorizers, urinal and toilet bowl blocks, and as an insecticide fumigant for moth control.

"Because people spend so much time indoors where these products are used, it's important that we understand the effects that even low levels might have on the respiratory system," said Leslie Elliott, Ph.D. a researcher on the NIEHS-funded study. "There has been very little research on the health effects of this particular compound in non-occupational settings."

The researchers used data from the third National Health and Nutrition Examination Survey (NHANES) and a special component of the study specifically designed to assess the level of common pesticides and VOCs in the US population. NHANES III is a nationally representative survey conducted by the Centers for Disease Control and Prevention between 1988-1994 to determine the health and nutritional status of the U.S. population. 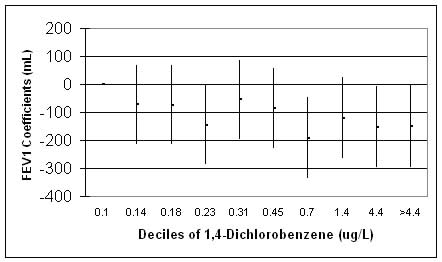 There was approximately a 4 percent decrease in the test which measures forced expiratory volume in 1(FEV1) second between the highest and lowest levels of exposure. FEV1 is a commonly used index for assessing airway function and obstruction.

The researchers assessed the influence of other factors in an individual's environment that may be related to pulmonary function and to 1,4-DCB exposure, such as type of heating, use of wood fires, age of house, presence of furred pets, occupation, socioeconomic status, environmental tobacco smoke, smoking history, and diagnosis of asthma or emphysema. The authors noted that participants might have been exposed to other agents not assessed in this study1that have been linked to both respiratory impairment and levels of 1,4-DCB.

"This research suggests that 1,4-DCB may exacerbate respiratory diseases," said David A. Schwartz, M.D., NIEHS Director. "As part of the new disease-focused approach at NIEHS, researchers will use this information to better understand the pathogenesis of respiratory diseases." The NIEHS unveiled a new strategic plan, "New Frontiers in Environmental Sciences and Human Health," in May aimed at challenging and energizing the scientific community to use environmental health sciences to understand the causes of disease and to improve human health. The plan can be accessed at http://www.niehs.nih.gov/about/strategicplan/index.cfm.

Next Release
Obesity in Men Linked to Infertility