UCLA's Lutz Birnbaumer, Who Has Helped Demonstrate How Cells 'Talk,' Will Be NIEHS' New Scientific Director

Biochemist Lutz Birnbaumer, Ph.D., a pioneer in the discovery of how the body's cells communicate with each other to regulate organ and muscle function, was named today as Scientific Director of the National Institute of Environmental Health Sciences (http://www.niehs.nih.gov). 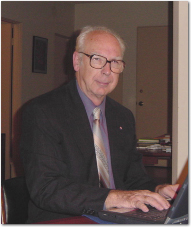 "Internationally well known and a member of the United States' National Academy of Sciences, Dr. Birnbaumer's research and leadership will further enhance the outstanding programs developed under the leadership of Dr. Carl Barrett," NIEHS Director Kenneth Olden, Ph.D., said in announcing Dr. Birnbaumer's appointment. "Under Lutz's guidance, I am confident that our commitment and pursuit of excellence will continue. He is just the right person to 're-stock' the institute with the kind of scientific talent needed to be competitive in the present scientific climate."

"Dr. Birnbaumer has the right combination of vision, intellect and administrative skills needed to move NIEHS to the head of the class."

NIEHS is the part of the National Institutes of Health (http://www.nih.gov/) that studies how substances in the environment cause or trigger disease. NIEHS's in-house research, which Dr. Birnbaumer will direct, is budgeted at $63 million and largely conducted at the NIEHS laboratories in Research Triangle Park, N.C.

Dr. Birnbaumer is professor and chair of the University of California-Los Angeles' department of molecular, cell and developmental biology, professor of anesthesiology and biological chemistry, and a full member of UCLA's Institute of Molecular Biology, Brain Research Institute and Jonsson Comprehensive Cancer Center (http://www.cancer.mednet.ucla.edu/) .

He was a postdoctoral fellow under a former NIEHS scientific director, Martin Rodbell (http://www.profiles.nlm.nih.gov/GG/) , when both were at the National Institute of Arthritis and Metabolic Diseases. Under Dr. Rodbell's direction, the young Dr. Birnbaumer carried out many of the experiments on cell communication that brought Dr. Rodbell the 1994 Nobel Prize in Medicine/Physiology.

An author of 250 research articles, Dr. Birnbaumer has been a member of the NIEHS Board of Scientific Councilors, which peer reviews the institute's intramural science. He has also had associations with the Salk Institute, the American Heart Association (https://www.heart.org/en/) and the Pew Charitable Trusts (http://www.pewtrusts.com/) . He has taught international graduate courses in cell biology in Belgium, Argentina and Sweden and has been a visiting professor at nearly 60 teaching institutions, including the Cleveland Clinic (http://www.clevelandclinic.org/) , Mount Sinai School of Medicine (https://icahn.mssm.edu/) , Harvard University (http://www.harvard.edu/) and Duke University (https://duke.edu/) and the University of North Carolina-Chapel Hill (http://www.unc.edu/) . Duke and UNC are located near the NIEHS' laboratories, which are in Research Triangle Park, N.C. (http://www.rtp.org) , and have several cooperative programs with NIEHS.

Born in Vienna, Austria, in 1939, the young Birnbaumer went to primary and secondary schools in Buenos Aires, Argentina, where his father, an engineer, and mother had fled under threat of deportation from Austria to the Soviet Union by the occupying Soviet forces. He studied biochemistry at the University of Buenos Aires, where he was awarded his master's degree and doctorate. He speaks English, German and Spanish, and reads French and Italian.

Listing his main research interest as biological cell communications or, more technically, membrane signal transduction mechanisms, Dr. Birnbaumer said when he was elected to the National Academy of Sciences in 1995.

"Early on, as a fellow in Martin Rodbell's laboratory, I found that the hormones that stimulate the enzyme adenyl cyclase interacted with receptors that required GTP, a cellular metabolite, to function. Subsequent work from many laboratories, including my own, showed this "GTP-dependent" step to be due to regulation of a separate group of proteins, now called G proteins."

What does this mean to non-scientists? Well, said Dr. Birnbaumer, "Signaling through G proteins regulates such cellular functions as odor, taste and light perception. It regulates liver, fat and kidney function. It regulates muscle contraction and nerve cell activity."

Dr. Birnbaumer is married to Mariel Birnbaumer, Ph.D., currently a professor at UCLA in the department of anesthesiology and physiology, and a member of the Molecular Biology Institute. Her past studies have isolated the gene and complementary DNA encoding the V2 vasopressin receptor (also an antidiuretic hormone receptor) responsible for water reabsorption by the kidney. Mutations of this receptor are responsible for nephrogenic diabetes insipidus, a rare condition of water imbalance first described in a 1892 report of families with excessive thirst combined with frequent urination.

In addition to its inherited forms, nephrogenic diabetes insipidus can also be environmentally acquired -- most often as a result of the use of lithium or some other drugs.

Dr. Olden today expressed his gratitude to Dr. Nettesheim "for delaying his retirement and for acting as scientific director in such an active and expert manner. Although he has joked of his hurry to retire, Paul has spared no energy on our intramural programs and on meeting any problems or opportunities that presented themselves. Paul has done a truly outstanding job, and the institute is deeply indebted to him and his family."