Study of Normal Women Demonstrates: There Are Few "Safe" Days in Menstrual Cycle

Guidelines for getting pregnant -- or avoiding pregnancy -- usually assume an average woman is fertile between days 10 and 17 of her menstrual cycle. But researchers at the National Institute of Environmental Health Sciences (http://www.niehs.nih.gov) have demonstrated what some accidentally pregnant women may have long suspected:

Only about 30 percent of women actually have their fertile window entirely within that timespan.

In fact, the researchers found, there is hardly a day in the menstrual cycle during which some women are not potentially fertile. Women in this study were of prime reproductive age (most between 25 and 35) when the menstrual cycles are most regular. The window of fertility should be even more unpredictable for teenagers or for women approaching menopause, the NIEHS researchers said.

Describing data on tests during nearly 700 menstrual cycles of 213 healthy North Carolina women, NIEHS' Allen J. Wilcox (http://www.niehs.nih.gov/research/atniehs/labs/epi/pi/reproductive/), M.D., Ph.D., statistician David Dunson, Ph.D., and epidemiologist Donna Day Baird (http://www.niehs.nih.gov/research/atniehs/labs/epi/women/index.cfm), Ph.D., reported in the British Medical Journal (http://www.bmj.com/) (Vol. 321, pp 1259-1262) that "women should be advised that the timing of their fertile window can be highly unpredictable, even if their cycles are usually regular." 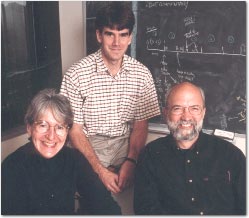 Dr. Wilcox, a physician and chief of epidemiology at NIEHS, said, "If the average healthy couple wants to get pregnant, they are just as well off to forget 'fertile windows' and simply engage in unprotected intercourse two or three times a week."

As for those seeking to use the cycle to avoid pregnancy, the odds are not good. "Our data suggest there are few days of the menstrual cycle during which some women are not potentially capable of becoming pregnant - including even the day on which they may expect their next menses to begin," according to the new scientific report.

With cycle day one being the day of the actual onset of menstrual bleeding, the researchers showed that 2 percent of women were starting their fertile window by day four, 17 percent by day seven. More than 70 percent of normal women were in their fertile window before day 10 or after day 17, leaving few universal "safe" days for such natural birth control systems as the "rhythm method." Even women who regard their cycles as "regular" had a 1 to 6 percent probability of being fertile on the day their next period was expected.

To obtain precise fertility information, the study required that the women volunteers provide daily urine samples that the researchers could test for estrogen and progesterone. An abrupt change in the ratio of these hormones marks the event of ovulation. This signal was used to identify days of ovulation during 696 menstrual cycles.

In previous reports, Wilcox and colleagues had shown that the fertile window spans six days, ending with the day of ovulation. In the new report they find that sporadic late ovulation occurs even in women who say their cycles are usually regular. Because of these late ovulations, the researchers show, 4 to 6 percent of women are potentially fertile in the fifth week - more than 28 days after the start of their cycle.

Having intercourse during a fertile day does not always produce a pregnancy, which also depends on the viability of the sperm and egg, the receptivity of the uterus and other factors that vary widely among couples.

NIEHS, which is one of the National Institutes of Health, has its laboratories in Research Triangle Park, N.C. (http://www.rtp.org/) , near Raleigh (http://www.raleigh-nc.org/) , Durham (http://www.Durham-NC.com/) and Chapel Hill (http://www.ci.chapel-hill.nc.us/) . The test subjects were women living in this area.

The NIEHS researchers said their report describes the only modern test data they are aware of on the range of the fertile window. However, they note that during World War I, a German physician described 25 pregnancies reportedly produced by single acts of intercourse during soldiers' leaves. The reported acts of isolated intercourse occurred from Cycle Day Two to Cycle Day 30 - according to the memories and circumstances told to the doctor. Now, 84 years later, this new study suggests that doctor's report was entirely plausible.

Next Release
Wood Dust, Talc, Estrogens, and Nickel Alloys Among Substances Being Reviewed for Inclusion in Report on Carcinogens