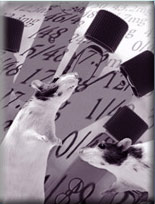 To help learn more about how human bodies repair their environment-damaged DNA and control their cells' life cycles, the National Institute of Environmental Health Sciences announced today it will fund up to five research centers to develop and breed mice with genetic variations that are more like humans' in these regards.

The centers will provide the special, mutant mice for scientists throughout the National Institutes of Health, of which NIEHS is a part, and to other research programs as well.

Many cases of almost every human disease are caused or triggered by a natural or man-made substance in the environment, often when an environmental substance causes a genetic mutation or a disturbance in cell growth. Variations in a person's genes make the person more -- or less -- sensitive to these substances or more - or less - able to resist or repair the damage.

Genetic variations explain why one smoker gets cancer or heart disease from that exposure while another smoker doesn't. Or why some members of a family react to environmental substances and develop asthma, while others do not. NIEHS said that understanding the variations in a mouse's genes better - and modifying the mice to add or subtract a human-like gene with its variations - will help scientists unlock the secrets of these and other human diseases in a variable humankind.

NIEHS said the study of mice with similar genes and variations could help scientists predict human risks far better. The Institute said the resulting information would help businesses, workers and local, state and federal regulators fine-tune environmental policies to protect the most susceptible subpopulations at the lowest cost.

Today, NIEHS said, policy makers may over-regulate in hopes of protecting these extra-susceptible people - but can not be sure the susceptible are indeed protected.

NIEHS Director Kenneth Olden, Ph.D., said, "Mice and humans have many similar genes. As a result, in two-year-long tests, mice are good predictors of whether a chemical will be likely to cause human cancer in some cases. By adding a human-like gene or knocking one out, we may get important information about human disease more quickly.

"Through genetic manipulation and study at these new centers," Dr. Olden continued, "we can see how much rodents are like humans in their varying genetic susceptibility. We can then use these mouse models to understand human variabilities to environmental factors that may have a role in human diseases like diabetes, Alzheimer's and Parkinson's diseases, arthritis and heart disease."

NIEHS is one of the National Institutes of Health which on Oct. 5, 1999, announced a $21 million NIH-wide effort to map the genes of the mouse via a Mouse Genome Sequencing Network. The NIEHS effort will support and supplement this program but emphasize understanding the variations in the genes that make some individuals more sensitive than others. If selected by NIEHS as centers, applying institutions would:

NIEHS said that it could spend up to $5 million a year in grants under cooperative agreements with other laboratories to create the centers and carry out the work, depending on the proposals from the competing applicants and other factors.

NIEHS has already developed and tested some gene-manipulated mice for screening chemicals. In the Dec. 17, 1999 issue of the journal Science Institute scientists reported development of a mouse in which both distribution systems or pathways for the female hormone estrogen are disrupted. The females of these generally healthy, long-lived but estrogen-deprived mice were unable to produce viable ova, or eggs, and cells in the adult female ovary changed to resemble the male cells of the testis.

In the past, NIEHS' studies of lead, asbestos, DES and some pesticide products have led to protective measures that have prevented many human diseases. Today, while continuing such studies, NIEHS's scientists have also pushed forward with molecular and genetic studies of the mechanisms by which environmental factors cause disease and the genetic variability of humans' responses to the environment, both natural and man-made.

For the full Request for Applications announcement for the centers, you can either view the RFA online or contact Jose Velazquez, Ph.D., (919) 54l-4998 or email: Velazqu1@niehs.nih.gov

Next Release
Dr. Raymond R. Suskind, Director Emeritus of the Department of Environmental Health at the University of Cincinnati College of Medicine and NIEHS Center Director (1969-1986) died Monday February 2, 2000