The National Institute of Environmental Health Sciences (http://www.niehs.nih.gov) announced today that it has created a half-million-dollar center at its laboratories in North Carolina to help evaluate the toxicity of chemicals by observing how they turn "on" or "off" thousands of different cloned genes clustered on a laboratory slide.

The changes in gene expression caused by the chemicals are read and displayed by computer, showing up as dots of color on the computer's screen. Potentially, the new NIEHS Microarray Center could provide safety information better and faster than do animal tests -- and would replace, augment or improve on many of them.

"We're very bullish on the center's potential to revolutionize the screening of chemicals," NIEHS Director Kenneth Olden said in announcing the center. 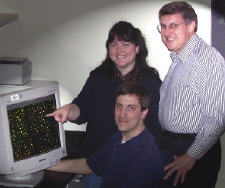 Happy with their results, ToxChip developers Cynthia Afshari, Emile Nuwaysir and J. Carl Barrett show how gene expression data for a known toxin is shown as colored patterns on a computer screen.

The new NIEHS Microarray Center makes use of the ToxChip, developed at NIEHS, which contains copies, or clones, of about 2,000 of the 80,000 genes in the human body. Millions of cloned copies of each gene form a nearly invisible dot that is "arrayed" -- hence the name -- in a grid pattern on the glass slide. The center also uses an even newer microarray, called the Human ToxChip, containing clusters of each of 12,000 different cloned genes.

Toxic substances produce changes that express, or turn on and off, genes, the center scientists said, and the chips and the accompanying computer support used to read the slides, take advantage of that linkage.

Initially the new center is evaluating known toxins -- for example, chemicals that are known to cause cancer and/or mutations -- to build a library or database showing the typical genetic changes that these known poisons produce. Once they have "signature" profiles of how known toxins change genes, the scientists said, they can evaluate other chemicals for potential harm by comparing the gene changes they produce with those made by the known toxins.

A match between an expression signature or "on/off" pattern produced by an unknown compound and that from an established toxic compound would indicate a potential danger in the test compound.

NIEHS Director Olden said, "There are thousands of both natural and man-made chemicals in human use and commerce that have never been adequately tested. We are developing a technology that will greatly aid in their evaluation and identification. The idea is simple: If ToxChip screening shows that a test chemical changes key gene expressions in the same way as a known toxin does, there's a strong likelihood the test chemical may be harmful too."

In addition to creating the new microarray center in its laboratories at Research Triangle Park, N.C., NIEHS plans to help other organizations -- including some of its 20 university-based environmental health centers -- establish microarray capabilities and skills. Already, visiting scientists, including several from abroad, have worked alongside the center's 12 scientists. A notice making grant support available was found at http://www.niehs.nih.gov/dert/ma-supp.htm.

Although developing a microarray capability currently may require start-up costs of $500,000, the screening tests traditionally carried out on mice and rats require more than two years and can cost $2.5 million per substance. As a result, only about 10 of the most commonly used chemicals can be screened each year by the National Toxicology Program (NTP), which is also headquartered at NIEHS' facilities in Research Triangle Park (http://www.rtp.org/) , the locale of high tech government labs and businesses between Raleigh (http://www.raleigh-nc.org/) , Durham (http://www.durham-nc.com/) and Chapel Hill (http://www.ci.chapel-hill.nc.us/) , N.C.

NIEHS Microarray Center Co-Director Cynthia Afshari, Ph.D., said that before mass chemical screening is carried out, the work promises to unlock some of the secrets of how our environment changes our genes. "From a public health standpoint, knowing how the environment changes our genes may be as important as knowing the functions of the genes themselves," Dr. Afshari said, "because we often can do something effective to change the environment or substitute one chemical for another in industry, whereas in most cases we cannot alter our genetic or cellular response to these agents."

Scientists using the ToxChip also see a potential for it to speed drug research by accelerating the safety tests that are necessary before testing potential new drugs in people.

Click on diagram for larger picture.ToxChips don't look like this except maybe to a computer but this schematic diagram shows a computer comparing a test chemical to three known toxicants and "matching" key gene patterns. If patterns match or are very similar, the test chemical seems likely to have the same mechanism of action as the known toxin. In other words, it probably has the same toxic effect on the body as the known toxin.Diagram from the NIEHS journal Environmental Health Perspectives/Emile Nuwaysir.

In the original ToxChip, the genes used are cloned duplicates of the genes of humans. The team has also developed additional microarrays using cloned genes from common test animals and organisms -- mice, rats, frogs (xenopus) and yeast. "We are making profiles of known toxins using several or all of these species' genes," Center Co-Director Richard S. Paules, Ph.D., said.

If you looked carefully at a glass slide that has been turned into a ToxChip, you would see a grid of dots, each looking like a bit of dust. Each dot is a cluster of millions of cloned copies of a single gene and is precisely placed in a grid by a robot.

When genes are expressed, or turned on or off, gene messengers -- a template or mirror image of the DNA -- is made called messenger RNA to carry out the DNA's will. These can be marked to appear either red or green when lasers are shined on them. These RNA molecules search for and connect with their DNA match on the slide and are read by a scanner as a red or green dot.

Changes in the red and green dots following exposures to test chemicals and to known poisons are read and compared using computers -- a process similar to reading two scanner codes on a supermarket purchase but then comparing them, rather than adding them up.

When these match up -- when, say, there is a similarity in the pattern of green or red spots -- there will be a good chance the new substance is also a poison, or toxin, and should be studied further.