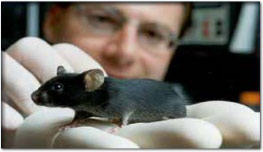 Click for larger image
John Couse, biologist in the National Institute of Environmental Health Sciences, holds a sister of one of the new "sex-reversal" mice whose ovarian cells reverted to male, testis-like cells. The NIEHS laboratory now has ten females of the new strain.

Scientists at the National Institute of Environmental Health Sciences and two neighboring research centers have bred a new strain of mouse in which both major pathways for estrogen are disrupted -- and found that, as a result, the tissues of the adult female's ovary begin to change to resemble those of the male testis.

More than a curiosity, this "sex change" -- and the new mouse -- should advance the understanding of the action of the female hormone estrogen, and that should ultimately improve our understanding of and treatment for human fertility, bodily functions and cancer.

Scientists at the University of North Carolina-Chapel Hill and the Chemical Industry Institute of Toxicology (which, like NIEHS, is in Research Triangle Park, N.C. adjacent to Raleigh and Durham also participated in the work.

The researchers generated mutant mice with neither estrogen receptors alpha or beta, thereby disrupting the body's estrogen signaling system. They found that in the adult females, the germ cells (ova, or eggs) in the ovary die and the supporting cells change to male-like cells. This is the first description of sex reversal in an adult ovary and the first due to disruption of the estrogen signaling system.

The attached background, from the authors, shows how far scientists have gone in five years in broadening science's understanding of the action of estrogen. The researchers are John F. Couse and Sylvia Curtis Hewitt, both of NIEHS, Donna O. Bunch of the University of North Carolina, Chapel Hill, Madhabananda Sar of the Chemical Industry Institute of Toxicology, Research Triangle Park, N.C., Vicki R. Walker, Barbara J. Davis and Kenneth S. Korach, NIEHS.

NOTE THAT THE PRESS RELEASE, PICTURE AND RESEARCH REPORT ARE EMBARGOED BY THE JOURNAL SCIENCE UNTIL 2 PM DECEMBER 16. (The issue is dated December 17.)

The physiological effects of estradiol, a steroid hormone produced in the ovaries [and the most potent of the female hormones called estrogens] are mediated throughout the body by estrogen receptor proteins located within cells. Estradiol, the hormone, flows through the circulatory system and is therefore essentially able to reach every cell in the body. What determines whether a cell uses (i.e. responds to) the estradiol is whether that cell has an estrogen receptor protein in its nucleus. Such cells that do possess the estrogen receptor are often termed, estrogen target cells, and they include the tissues composing the uterus, cervix, vagina, ovary, breast and prostate. Over the years, a number of other "non-traditional" or "non-sexual" estrogen target sites have been found, such as the cardiovascular system, bone and the nervous system.

The SCIENCE manuscript is the initial description of these new mice, called alpha/beta-ERKO mice. First and foremost, the successful generation of the alpha-betaerko mice shows that neither receptor is required for survival, which will come as a surprise to some scientists in the field. Some of the new strain have already lived a year.

The alpha/betaERKO females do not have the same problems as alpha- or beta-ERKO females. Instead, although the ovaries develop normally, as the animals mature the germ cells (ova, or eggs) in the ovary die and the supporting cells (granulosa cells) "transdifferentiate" into cells that strongly resemble a cell type found in the male testis (Sertoli cells) - a kind of sex reversal. This is the first observation of sex reversal in an adult ovary (although this has been reported in the still-developing fetal ovary.) This is also the first observation (at any age) of a sex reversal due to disruption of the estrogen signaling system.

Within the field of steroid hormone action, we believe, this observation is of great impact. In addition, we believe the new mouse strain will be a valuable tool for 1) discerning the role of the estrogen receptors in the ovary and female fertility in general and 2) further discerning the role of the estrogen signaling system in normal physiology and in cancer.