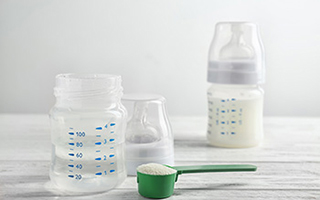 Soy formula is an infant food made using soy protein and other components. It is fed to infants as a supplement or replacement for human milk or cow milk formula.

Why are people concerned about soy infant formula?

The safety of soy infant formula has been debated because it typically contains a class of compounds called isoflavones. Isoflavones are naturally occurring compounds found primarily in beans and other legumes, including soybeans, peanuts, and chickpeas.

The primary isoflavones found in soy products, including tofu, soy milk and soy formula, are genistein, daidzein, and to a smaller extent, glycitein. These isoflavones are referred to as phytoestrogens because they are found in plants (phyto) and because of their ability to act like the Hormone estrogen in the body.

Although there have been no specific health problems documented in human infants receiving soy formula, it is recognized that infants go through developmental stages that are sensitive to estrogens. Therefore, infants are more likely than adults to be vulnerable to the estrogen-like effects of the phytoestrogens in soy. In some cases, the health effects resulting from a soy-based diet may not be apparent until years later.

What are the potential health effects?

Animal studies indicate that health effects of possible concern include early onset of puberty in females and alterations in development of breast tissue.

Are infants affected differently than toddlers or adults who eat soy?

An infant’s diet is virtually 100% milk and/or formula. So for infants that are fed only soy formula, they have much higher soy exposure levels than do toddlers or adults who consume a variety of foods and less soy as a percentage of their diets.

Also, infants go through developmental stages that are sensitive to estrogens. Therefore, infants are more likely than adults to be vulnerable to the estrogen-like effects of the phytoestrogens in soy.

Are there alternatives to soy formula if infants cannot tolerate animal milk?

According to the American Academy of Pediatrics, the alternatives to soy formula are amino acid formulations. Amino acids are the building blocks of pure protein. These formulations contain amino acids and all the other ingredients added to current infant formulas to provide appropriate nutrition. Lactose-free cow milk formulas are also now available. The American Academy of Pediatrics (AAP) promotes the use of human milk as the ideal source of infant nutrition. The 2008 AAP revised clinical report states there are few indications for the use of soy protein-based formula in place of cow milk-based formula in infants. According to AAP, the only real indications for soy formula use are for infants with congenital galactosemia, for use by families who are strict vegans, or infants who are truly lactose intolerant. For more information, read AAP's May 2008 statement Use of Soy Protein-Based Formulas in Infant Feeding.

What should concerned parents do?

As with all health matters, parents should consult their child's doctor.

I thought soy food was good for me, isn’t it?

The expert panel’s conclusions only apply to infants fed soy formula and not to children and adults who consume soy foods or soy supplements.

There are a number of reasons NTP panel evaluated the safety of soy infant formula, including:

Did NTP convene an expert panel to evaluate the safety of soy formula?

The NTP and the expert panel used a five-level scale to express their conclusions. The conclusions characterize the likelihood of an adverse human health effect resulting from exposure to a substance or chemical — in this case soy infant formula. The concern levels range from highest to lowest.

The NTP used a five-level scale in its conclusions to characterize the likelihood of an adverse human health effect resulting from exposure to a substance or chemical — in this case soy infant formula. The concern levels range from highest to lowest.

What role does the expert panel play in NTP's evaluation?

The panel of experts advises NTP, which will reach conclusions on whether exposure to soy formula is a hazard to human development, and identify data gaps and research needs.

Did NTP evaluate soy formula before?

What did NTP conclude? 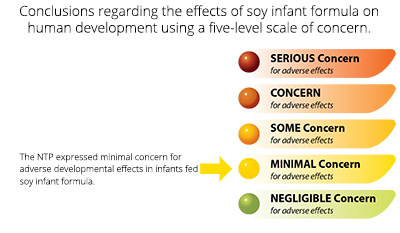 How will NTP conclusions be used?

NTP conclusions are intended for use by parents, health professionals, and appropriate regulatory authorities to make personal or public health decisions.