Wondering how to handle honorary degrees and gifts from outside sources? This webpage will provide the answers.

Receiving Awards from Outside Organizations 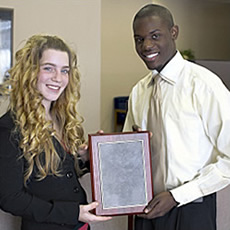 NIEHS employees make outstanding contributions to the biomedical sciences that are recognized by outside organizations in the form of awards. Employees may accept gifts associated with such awards and honors subject to the following guidelines and limitations. Where an employee can only be approved to accept gifts associated with an honor or recognition under the awards exception to the gift rule, advance approval is required via the Award form (see Note 1). No outside activity request is needed.

Note 1: Where ALL gifts associated with an award or honor can be accepted under other exclusions from or exceptions to the gift rule, employees must obtain prior approval as required for the application of those other exclusions (e.g., worthless plaque) and exceptions (e.g., Widely Attended Gathering (WAG), sponsored travel, etc.). The award form will not be used.

With prior approval, an employee (other than an employee with responsibility for matters affecting the award donor, see below) may accept gifts, other than cash or an investment interest, with an aggregate market value of $200 or less if such gifts are a bona fide award or incident to a bona fide award that is given for meritorious public service or achievement by a person who does not have interests that may be substantially affected by the performance or nonperformance of the employee's official duties, or by an association or other organization, the majority of whose members do not have such interests. Gifts with an aggregate market value in excess of $200, and awards of cash or investment interests, offered by such persons as awards or incident to awards that are given for these purposes may be accepted upon a written determination by an agency ethics official that the award is made as part of an established program of recognition:

An employee may not accept gift(s) with an aggregate market value of more than $200, or that is cash or an investment interest, which are an award or incident to an award from a person, organization, or other donor that:

Exceptions may be requested as outlined in the HHS Supplemental Standards of Ethical Conduct (5 CFR 5501.111) to permit the acceptance of gifts associated with an award having an aggregate market value of more than $200, or that is cash or an investment interest, when those gifts are associated with the most prestigious awards that confer an exceptionally high honor in the fields of medicine or scientific research, e.g., Nobel Prize or Lasker Award.

Pre-Screening and Approval of Awards

Employees must obtain approval from their Deputy Ethics Counselor (DEC) before accepting gifts that are an award or associated with an award or recognition. Awards which confer a cash prize, directly to the recipient or to any other entity as a result of the employee's selection, must be pre-screened before any employee can be approved to accept the gift(s). This process is handled through the NIH Ethics Office, and the actual screening is done by the Advisory Committee to the Director, NIH (ACD), with recommendations made to the NIH DEC who will determine whether these awards meet the regulatory criteria described above (see General Acceptance of Gifts Associated with Awards - 5 CFR 2635.204(d)). See the List of Approved Awards.

Awards that only bestow the following do not require ACD review:

Where gifts associated with an award or recognition cannot be accepted under other authorities (see Note 1 (#noteone) above), but do not include cash or an investment interest, and an award form is required, the employee's DEC must 'pre-screen' and determine whether the award meets the regulatory criteria for bona fide, as described above (see General Acceptance of Gifts Associated with Awards - 5 CFR 2635.204(d)).

Note 2: All award forms submitted by senior NIH staff, and forms submitted by other employees seeking permission to personally accept gifts valued at $2500 or more must be reviewed by NEAC prior to the NIH DEC decision. When reviewing an employee's request for approval to accept gifts associated with a 'pre-screened' award, the DEC should consider the following points: