Two NIEHS-funded research centers, known as “Core Centers,” sponsored community forums in May, giving scientists and health advocates an opportunity to showcase their work and to discuss important and emerging topics with NIEHS leaders.

NIEHS and National Toxicology Program (NTP) Director Rick Woychik, Ph.D., led a discussion on precision environmental health during his visit with the University of Cincinnati (UC) Center for Environmental Genetics (CEG) on May 10. NIEHS Deputy Director Trevor Archer, Ph.D., gave a keynote presentation on addressing anti-racism in science as part of a virtual event hosted May 18 by the Mount Sinai Center on Health and Environment Across the LifeSpan (HEALS). 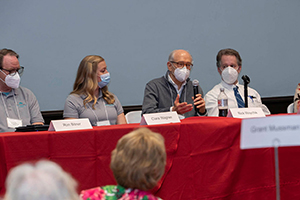 “At NIEHS, we produce and fund scientific knowledge that promotes individual and public health,” Woychik said at the UC community forum. “Thousands of lives are saved, and diseases prevented, as a result of standards created on the basis of NIEHS research results.”
(Photo courtesy of Lisa Ventre / University of Cincinnati)

“Precision environmental health is a framework for understanding how environmental exposures throughout the life course can interact with an individual’s unique genetic, epigenetic, and biological makeup and influence later-life health outcomes,” noted Woychik.

“To help prevent disease in Cincinnati and beyond, researchers must work to better understand gene-environment interactions and the corresponding biological changes that can result,” he said.

During his visit, three early-career scientists from UC shared their gene-environment research.

“I really enjoyed meeting the investigators behind the work that we support at the University of Cincinnati,” said Woychik. “They will help drive the future of environmental health sciences.” 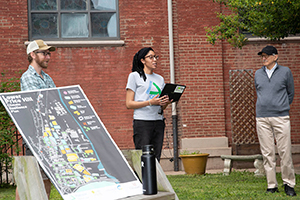 Climate resilience and citizen science efforts were among the topics discussed by leaders of Groundwork Ohio River Valley. Other presentations featured representatives from Urban Health Pathway and the Center for Closing the Health Gap. “I was really inspired by the community member presentations,” said Woychik. “Visiting the neighborhoods and talking with residents reinforces the important role that community engagement plays in helping us achieve our mission at NIEHS.”

Inclusivity in the scientific workforce

Anti-racism and environmental justice were among the featured topics of the second community forum. The online event was hosted by Luz Guel and Maida Galvez, M.D., from HEALS, which is an NIEHS-funded core center at the Institute for Exposomic Research in the Icahn School of Medicine at Mount Sinai, which is in New York City.

Archer was one of three featured speakers. He shared information about NIEHS and National Institutes of Health (NIH) initiatives to address racial disparities in biomedical research and advance environmental justice, including the following.

Archer serves as co-chair of UNITE Initiative’s “I” Committee, which challenges all NIH institutes and centers to apply the Racial and Ethnic Equity Plan (REEP) process.
(Photo courtesy of NIEHS)

“Greater inclusivity in the scientific workforce will promote innovation at NIH and across the biomedical research community,” said Archer. “And at NIEHS, increased community engagement will help to ensure that our work informs the health decisions of individuals who often are disproportionately affected by environmental exposures.” Learn why Archer says that diversifying both research designs and the scientific workforce will lead to innovation by reading this Environmental Factor story.
(Photo courtesy of Vectors Bang / Shutterstock.com)

“This faculty really is an attempt within NIEHS to draw attention to the science behind health disparities and provide action steps for researchers and impacted communities,” he said.

Archer also announced that the next NIEHS-supported Environmental Justice Boot Camp will be held August 15-16.

Addressing environmental and climate injustices and exploring racism as a social determinant of health were among the topics discussed by Almetta Pitts and Sacoby Wilson, Ph.D., who also were featured speakers at the May 18 event. Wilson provided an historical overview of scientific racism and environmental justice.

John Schelp, NIEHS special assistant for community engagement and outreach, and Liam O’Fallon, health specialist in the institute’s Population Health Branch, helped to organize these and other NIEHS community forums, and they contributed to this article.

(Jennifer Harker, Ph.D., is a technical writer-editor in the NIEHS Office of Communications and Public Liaison.)