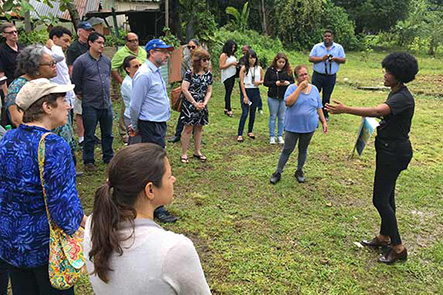 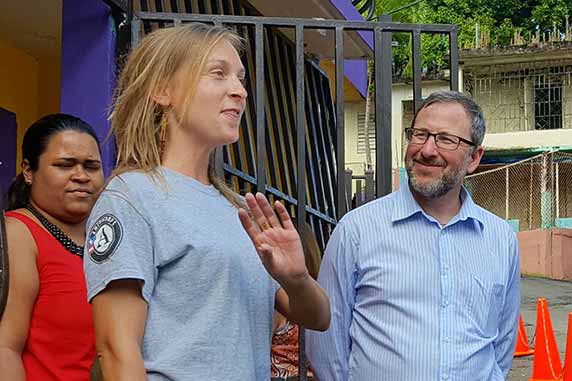 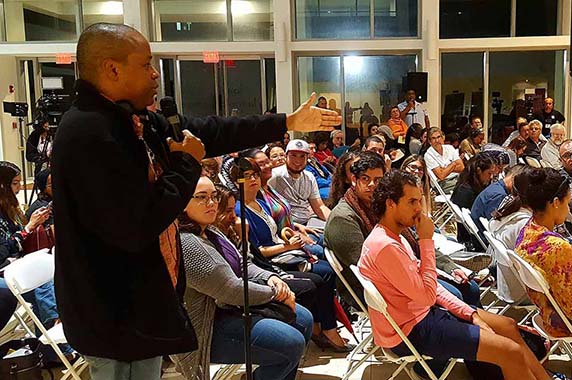 A focus on breast cancer drew upwards of 100 people to the latest NIEHS community forum. Sponsored locally by the City of Hope Medical Center, participants in the Nov. 16 event in Duarte, California came from across the Los Angeles basin.

NIEHS and National Toxicology Program Director Linda Birnbaum, Ph.D., holds several such forums each year to hear from local residents about their environmental health concerns. This one was held in conjunction with a meeting of the Breast Cancer and the Environment Research Program grantees (BCERP; see sidebar). 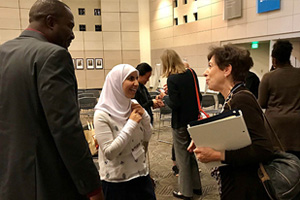 Birnbaum stayed after the event to speak with community members on a more personal level.
(Photo courtesy of John Schelp)

Birnbaum also emphasized the two-way exchange that is the goal of these events. “These community forums highlight the research we support. The forums [also] provide an opportunity for my institute and other public health groups to hear the public’s concerns about environmental health,” she said.

Congresswoman Judy Chu, Ph.D., planned to attend, but stayed in Washington, D.C. for a congressional vote. She provided remarks by video. Besides Birnbaum, four other panelists participated. The City of Hope, which concentrates on research and treatment of cancer, is a BCERP grantee. Ikuko Bentsi-Barnes, Ph.D., who headed up the planning team for the forum, reflected on the value of having federal research representatives listen to local concerns.

“These forums are essential because they present information on exposures based on scientific evidence, demonstrate that it is important to have community involvement, and provide links to where the community can obtain additional information,” she said.

Birnbaum credited the work of the planning committee for much of the success of the free event. The group advertised in local newspapers, online, and reached out through community representatives. 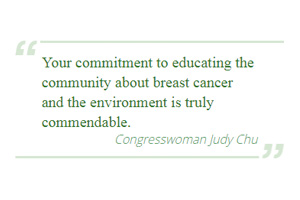 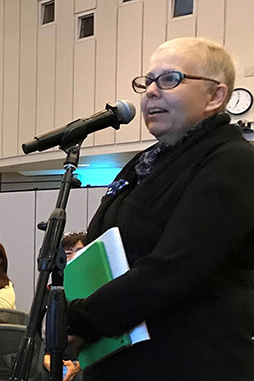 A good turnout by a highly engaged audience made for a successful forum, according to organizers.
(Photo courtesy of John Schelp)

As with other NIEHS community forums, most of the time was reserved for the audience to voice concerns and ask questions. The discussion was moderated by Michele Rakoff, from the Breast Cancer Care and Research Fund. She brought deep experience working with local residents, as a partner on the City of Hope BCERP grant.

Audience members included breast cancer survivors, family members, and area residents who had questions about how chemicals in their environment might be involved in the disease. During the 90-minute meeting, the discussion ranged far and wide, according to John Schelp, NIEHS special assistant for community engagement and outreach.

“We heard about disparities in breast cancer risk as well as in mortality from the disease, challenges to families, questions from activists, and concerns about things like air pollution and plastics, among other topics,” Schelp said. The role of interactions between genes and the environment was also raised, along with the possibility that the environment may outweigh family connections in disease risk and prognosis.

A representative from her office attended and presented a certificate to NIEHS, in recognition of achievements high standards of excellence. The text read in part, “Your commitment to educating the community about breast cancer and the environment is truly commendable. Your dedication has made a lasting and positive impact on society.” The document was signed by Chu, who represents the Pasadena area.